Finally caught the whole movie at one go. It's about two circus kids whose father, Jackie Shroff (the most uncircus like man I have ever seen and the owner of 'The Great Indian Circus' in the USA), and how banks cause financial ruin thereby causing Shroff to shoot himself. This despite the fact that he shows the bankers his best act to date - a disappearing kid from box coming back from back of aisle. Why did that act not impress the bankers? I did not impress me too - its as old as the hills. 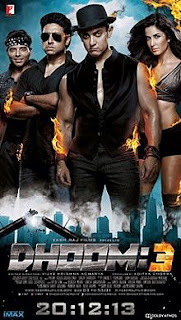 Anyway the young kid grows up to be a young and muscular Aamir Khan who performs these circus stunts with Katrina Kaif and on occasion - robs banks and throws the money over the roof. He runs down the walls of skyscrapers, races bikes that turn into cars, boats, helicopters (not really and makes life miserable for two Indian cops Jai and Ali. We don't know why the cops are in the US but then Jai very ingeniously finds out the truth about the other twin - one who is not so fast as the other, has trouble tying his shoes, and is in love with Katrina too. After some brilliant psychological games Jai befriends the slightly off twin (the kamzor twin) and somehow tries to trap the twins before their final act - to ruin the about to shut bank that ruined their father and their lives. After some more stunts they find cops at both ends of the bridge and jump off a huge dam. Hopefully they will have some gadgets to fly off to some far away place where they can live happily ever after minus Jai, Katrina (who keeps the legacy going by herself, talk of loyalty) and their like.

Nothing about it made sense really. But what does? Jai and Ali need a makeover. They look jaded. Its almost like the focus was so much on AK that the rest of the main team faded into the background. Actually if you see the poster you know who the hero is. Also there are two heroes - the twin is hiding behind this chap, next to Katrina.
Posted by Harimohan at 12:35 PM