Meet the angriest old man in Brooklyn (Robin Williams) who has a long list of things he is mad about (he is coming off a once-happy marriage which broke up on the untimely death of one of his sons, his second son choosing a different career and his wife preferring a different partner). Old man is heading to the hospital to meet his doctor as follow up to some tests done for his headaches and survives a crash by a cab driven by a foreign cabbie. Instead of his philandering doctor he meets the doctors lover, another doctor who substitutes for him and who has to break the news of a brain aneurysm to him. This new doctor is highly strung - her cat committed suicide, her lover is using her and she is a dug addict. In this highly volatile mix comes the news of his aneurysm. She tells him that he has 90 minutes to live inspired by a magazine cover. 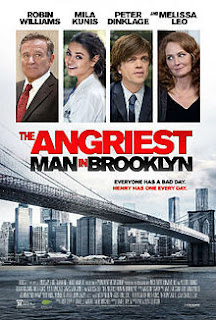 The man runs out of the hospital in his gown and wants to make love to his estranged wife, meet a bunch of old pals, make up with his son and stuff like that in 90 minutes. The doctor recovers from her pill popping and realises that she had told the man something she should not have and tries to get him. On and on until the man gets some moments and finally dies in eight days.

It has some terrible reviews on the net and when I write the story it does seem terribly contrived but while I watched it I had no problem so maybe I was in a good mood or this movie has something different about its treatment.

Posted by Harimohan at 7:22 PM

Robin Williams can do wonders to the most insane story..

He's a mystery to me - how he gets under the skin of all characters he portrays with his unconventional looks, sad eyes and that incredibly vulnerable air about him.