Good Dr. Schultz (Christopher Waltz, incredibly smooth) is a bounty hunter in the 1958 times, and a man of amazing persuasive ability. Smooth talking his way through extremely hopeless situations Dr. Schultz, the German doctor, does not care much for slavery either. He enters the scene in style, frees Django (Jamie Foxx) who is chained and being led away by slave traders. Schultz needs Django to identify some bounty and promises to free Django after he gets his bounty. He does better - he makes him a partner and his trainee through the winter as well. 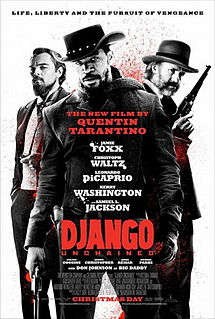 Django has to save his wife who is now in the captivity of another slave trader Calvin Candi (Leonardo DiCaprio, suave and temperamental), notorious for his blood sports and rather casual treatment of slaves and humans, and he enlists the help of the good Dr. Schultz. How the two go ahead with the plan, suffer some collateral damage, yet accomplish the goal is what Django Unchained is about.

Heavily inspired by Rajnikanth I'd say, glasses and all, save the style. The style goes to Dr. Shultz which makes it clear that one cannot do all that Rajni does, we need two. But Django can do anything and he does. Tarantino is at his best, making scenes grow bigger, using visual effects of bodies and blood spilling like geysers, but capturing the audience by the collar because you still want to know how they get away from it all, or die. Django is full of such scenes. Interestingly I saw Tarantino's name in the movie credits too.

Slavery and its full impact depicted in the backdrop. White supremacy and the arrogance of owning people glowers from up above. Christopher Waltz takes the show to another level, sophistication and danger blended exquisitely. I loved the scenes where he finally squares off with Leonardo Di Caprio in the end, adrenalin busting stuff. Jamie Foxx is Django all the way, but hey, Rajni is still the man to have in that role. Too much blood and gore for me, and too many things that looked like a Bollywood flick. But Django don't bore anyway so it's all ok. With Tanatino sometimes you get the feeling that he is making a huge joke of the whole thing, but thankfully, you are involved in the joke.
Posted by Harimohan at 5:20 PM

If there is anything like meaningful violence in films, this is it.