Chris Anderson is Head of TED. He shares his experiences on how to give a good TED talk. Most times, it also helps with other talks. I really liked the examples he gave, which meant there are so many talks to watch again. 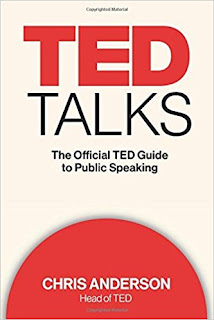 Chris says your number one mission as a speaker is "to take something that matters deeply to you and rebuild it inside the minds of your listeners." This is the idea. Give them a mental construct that they can hold on to, walk away with, value and be changed by.

Start With the Idea
Start with an idea. Allow language to build your idea inside the audiences. Communicate motion. The talk is a journey the speaker and the audience take together. You, the speaker are the tour guide. Avoid making talks that are - sales pitches for yourself, rambling, about your organisation and how great it is, inspiration performances which is trying to imitate someone hard.

Throughline
Chirs suggest that we get our throughline clearly. What's your point? Say something meaningful. The Throughline is a connecting theme that ties each narrative element. It's the central idea that traces the path that the journey takes.

Ideally present just one idea. An idea bigger than you.
"Overstuffed equals underexplained.'

2 Points to Make the Talk Interesting
To make things interesting check for these two points - 1) show why your idea matters and 2) flesh out each point with real examples, stories and facts. Unpack your talk and your point meaningfully.

Ken Robinson, a superstar TED speaker says his talks have this structure 1) introduce the topic, what will be covered 2) context, why it matters 3) cover main concepts 4) practical implications 5) conclusion.

Narration - Base it on a character that audiences can empathise with, build tension in your narrative, offer the right amount of detail - not too much, not too little, end with a satisfying resolution. The goal is to give.

Explanation - Start with where we were, hint at where we are headed, light a fire called curiosity, bring in concepts one by one, use metaphors, use examples. Build one idea upon another logically.

Persuasion - Prime the audience, make the audience detectives. Persuasion is the art of replacing someone's world-view with something better, Use the power of reason to create long-term impact. Use reason accompanied by intuition pumps, detective stories, visuals.

Revelation - Show, don't tell. You could show a series of images, give a demo of the product, describe your vision, take them on a wonder walk

4 Key Elements to Consider Before the Talk


Visuals
If you are using visuals - use them to enhance revelation, for explanatory power and for aesthetic appeal. In slides, no bullets, no dashes, no underlining and italics. Videos are helpful. Never read from the visual.

Scripted talks
If you are scripting the talk, script, time and rehearse till it is second nature. Chris talks of the 'uncanny valley', a space where you feel you know enough but are not sure if you will remember. He cites examples of speakers who have rehearsed their fully written and timed scripts until it became second nature and gave their talks flawlessly. Aim to complete your talk in 15 minutes so you have some slack.

If you have a full script that you memorised, you could carry some bullet points, or even the entire speech in your pocket. The idea is to refer in case you forget. But whatever happens, never read your speech.

For unscripted talks - have a clear structure, anecdotes and examples - well thought out. Again the flow should be clear in your mind and should be second nature. The problem with unprepared unscripted talks is that words could fail you and leave you searching for the right words, you could leave out something important, you could overrun your timeslot.

Rehearse
Whether scripted or unscripted, rehearse multiple times, time the talk and keep at it until the talk becomes second nature. One particular speaker says she practiced the talk while doing another task what required some measure of engagement to get it fully right.

Open and Close
The opening and closing of your talk are the most important, so practice these well.
Opening - be dramatic, ignite curiosity, show a completely slick video, tease, but don't give it away
Ending - give a call to action, camera pull back to pan over the field covered, give a personal commitment, share values and vision, satisfying encapsulation

Preparation
Once the talk is ready get your clothes etc in order. Nothing too formal like ties and suits. Originally TED insisted on no ties (the previous head actually walked on stage and snipped off a tie when one speaker wore one despite warning). Wear anything you are comfortable wearing.

Get your stage set. Slides (run through once before, have back up plan), whether you wish to use a lectern, note cards, or (gulp) nothing.

On Stage
Before you go on stage, mentally settle down. Breathe, visualise the outcome of the talk - a standing applause, drink water, relax, smile, surrender and back your preparation. Be vulnerable, find friends in the audience or at least friendly faces, smile. Have a backup plan ready and know it cannot completely collapse. There will be nerves, but use your nerves to great effect.

Voice and Presence
Stand tall, comfortably, equal weight on both feet, legs few inches apart, use hands and arms to emhasise. Don't need to walk around, can turn at waist to turn towards the audience on sides. Don't keep hands in pocket (I did for a few moments and then pulled them out). Don't shift and shuffle nervously.

It is a very helpful book and has several references to some of the great talks which I propose to watch. I will list the same below/ When I was asked to give one, I had problems deciding on the idea, was clear I wanted no visual aids, decided to script fully and memorise, prepared till the last minute, overcame nervousness of forgetting by breathing, visualising a standing applause, backing my preparation and delivered a decent talk. I even wrote a blog about how I survived it.

TED talks are of 18 minutes on stage to present an idea that matters to you. They are usually quite strict about the time and it makes sense to wind up by 15 minutes to account for any lag. There is no room for complacency so better take it seriously, script, prepare, rehearse and deliver a great performance. Thanks Raja.

Some of the great TED talks he recommended and wrote about in the book
Monica Lewinski - The price of shame
Sophie Scott - Why we laugh
Kelly McGonall - How to make stress your friend
Ken Robinson - Do schools kill creativity?
Dan Pink - The puzzle of motivation
Ernesto Siriolli - Shut up and listen
Andrew Solomon - How the worst moments in our lives makeus who we are
David Christian - The history of our word in 18 minutes
Bonnie Bassier - How bacteria talk
Elizabeth Gilbert - Your elusive creative genius
Barry Schwartz - The paradox of choice
David Gallo - Life in the deep oceans
Jamie Oliver - Teach every child about food
Zak Ebrahim - I am the son of a terrorist, here's how I chose peace
V.S. Ramachandran - 3 clues o understanding your brain
Amy Cuddy -Your body language shapes who you are
Dan Pallotta - The way we think of charity is dead wrong
Rita Pierson - Every kid is a champion
Amanda Palmer - the art of asking
Bryan Stevenson - We need to talk about injustice
Dan Dennett - Dangerous Memes
Esther Pavel - Rethinking infidelity
Posted by Harimohan at 9:46 AM