It's one of the few plays I have read. 'Pygmalion' is a Greek mythological sculptor who fell in love with his own sculpture and Shaw's play is based on that idea - Professor Higgins falls in love with Liza Doolittle in his play - he claims to have made a common flower girl into a lady but in the end realises that there is more to it than just an academic interest. 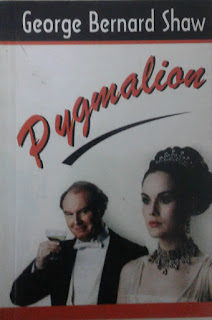 Having seen 'My Fair Lady' recently I could delight in the excellence of both works.  A large portion of the dialogue is the same and while some have been added for cinematic effect, some parts have been modified a bit including the end. I wondered at the perfection of the casting - cannot imagine anyone but Audrey Hepburn in the role of Liza Doolittle, Rex Harrison as Prof Higgins. But in this sea of unbelievably superb characters one character stands out - Alfred Doolittle. His character, his dialogue are unique and I believe he will walk into my top 10 characters I would like to meet from novels any day. A man with no morals (can't afford them governor) and a healthy fear of middle class morality, he is content to live a life of sin, bumming money off people and drinking it off without a care in the world. He touches people for money but only to the extent that it does not corrupt his soul and make him think of saving and such and get trapped in middle class morality. So he rejects Higgins offer of ten pounds as against his original request for five and takes only five. I loved what Shaw does to him - he sinks him with a rich inheritance which traps Alfred forever in the life of a gentleman.

That said every character is unique in its place. Sharp, manipulative, loveable fully in their follies. Eliza's desperate desire to make something of her life, Higgins myopic self love, Alfred's dread of life and its trappings - delightful. Guess I will have to watch the movie again. But of Shaw's brilliance, a vignette.
Posted by Harimohan at 10:52 PM