Sushant Singh convinces you in the first frame that he will play Dhoni as well as he can. The swing of the arm, the decisive movement as he takes his sweater off, a touch of the elbow. He never lets up once he gets under MSD's skin and that's a huge plus for the movie. 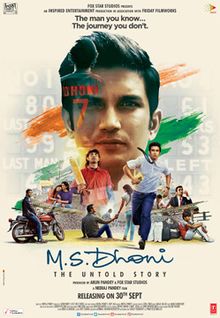 Not to mention the huge aura that MSD carries with him as a winner and as a human. I am an unabashed MSD fan. so it's easy to love MSD, his ways, his thoughts and his smile. And because we already love him, its easier to love all that he has done and experienced already. Only thing, it had to be convincing and Sushant ensures that.

So we get a peek into his small quarters in Ranchi, his father's job as a pump operator, his clear thought process that somehow sports would make him a nawab, his friends, his early successes and failures, his disappointments, his job as a TTE, his loves and losses. One falls more in love with MSD by the end of the film and one really craves to see the original - and when Neeraj Panday finally shows the real MSD in the end Shobha said 'that was worth it all'. MSD smiling and handsome, casual and charming, after the World Cup win in 2011. I'd have loved to see the original in the cricket scenes - wouldnt have made a difference - would have enhanced it even.

After seeing the movie our admiration for this boy from Ranchi only grows so much more. You realise that somewhere along the line MSD figured that its best to let his actions do the talking. How he held his own among the big town boys, figured his way and lived on his terms is amazing. His romances were nicely shown, his heartbreak at the death of his first love was touching. So was the vulnerability he experiences when he is not sure if he will play the next match.

A tad long I felt, but its certainly worth watching. I recalled watching the India A tour when he whacked the Pakistan bowlers all over, long hair and all, the century in Vizag against Pakistan and the unbelievable knock against Sri Lanka and his guitar strumming gesture, the metamorphosis into captain cool, the greying beyond his years and the many accolades he won for winning the T 20 World Cup and the 2011 World Cup. Was one rewind session almost.

Great show Sushant Singh. If you failed to get one move right, this would have gone down the drain. From the walk to the talk, the gaze to the shots, perfect. One only hopes MSD is as smooth as Sushant is in the romantic scenes! Highly recommended.
Posted by Harimohan at 3:56 PM