I Never Danced At The White House - Art Buchwald

I read Art Buchwald's column in 'The Hindu' as a school kid. I was impressed with his wit and irreverent sense of humour and read it regularly despite not understanding some American references and the political references. When I was asked many years later to write a column for the 'New Indian Express' I made up my mind to write a column like Buchwald. I titled it 'Unintended' and it generally satirised a lot of things that bothered me. Art inspired me in many ways and I am glad to report that while it lasted the column had a decent fan following. 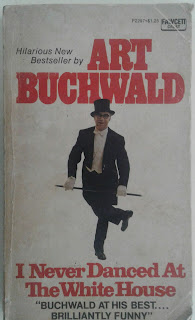 So when Vinod gifted me a copy of Art Buchwald's 'I Never Danced at The White House' I was delighted. I read it at the pace of a column a day, wondering how easily he lampooned the President and showed what the ordinary person on the road thought of the politics of war etc. I remember a quote that said something like 'my idea of telling something funny is to tell the truth'. Art said it like it was and he was funny.

The book has sections titled 'What is a Watergate?' , 'Where is the President?', ' A Slowboat to China', 'How is everything in Paranoia?', 'Apathy Landslide.' 'The Facts of Life', 'We're Number One', 'Working on the Rail Road', 'Shame on you Burt Reynolds', 'Depletion for humans', 'Binding the wounds', 'Uncle Teddy goes to sea and 'No More Bombs'. Needless to mention Art was best at the time the Watergate scandal broke out and he picks on President Nixon mercilessly.

Not all columns are political of course. He takes off on teenagers, friends, television and what not. Brilliant stuff.
Posted by Harimohan at 12:05 PM