For its sheer brilliance you can mention it as seen each time you see it. For lack of any other movie to play I offered The Bicycle Thief to a motley bunch - from a dismissive 9 year old to a I-want-to-see-happy-films wife to a 25 year old who loves science fiction - and they stayed glued to the movie throughout. 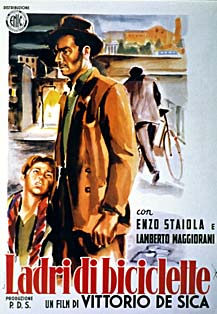 Vittorio De Sica's 1949 masterpiece finds place in any list of the greatest films ever made. From the first scene he grabs you. Poverty, unemployment in post World War II make lives difficult. Ricci gets a job but he needs a bicycle. He has already hocked his bicycle to keep his family going. To get the bicycle and the job his wife pawns the bedsheets. Ricci manages to lose the bicycle on the first day. He and his son Bruno search for the bicycle almost find it but are forced to give up that search. Ricci finds the world unjust and decides to take things into his hands. He is rescued by his son in the end.

The journey of those two days shows Ricci's state of mind and more importantly the growth of his ten year old son, who senses his father slowly losing it. The kid is brilliant. You could watch it any number of times.
Posted by Harimohan at 3:32 PM