Philippe Petit walked the distance between the twin towers in New York on a high wire in  August 1974 with no support or safety equipment and named it 'le coup'. 'The Walk' is a movie based on that epic walk when Petit walked the wire eight times, to and fro for 45 minutes, at a height of 1350 feet, saluting the crowds, kneeling on it, once even lying down on it. It was a time when the twin towers were being built that Petit staged his unauthorised walk. 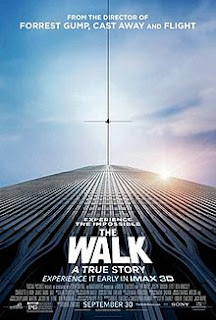 Young Petit is a juggler, high wire artist and many other things. While in Paris he sees a picture of the twin towers and to put a wire across those towers and walk across that becomes his life mission. He accumulates accomplices to help him in his mission, including the lovely Annie, Jean Paul, Jeff, JP, coach Papa Rudy, who guides him and makes a detailed plan to fulfil his dream. Nothing stops the young man - not even an injured foot that bleeds throughout his walk on the high wire, not the lack of permission, the many snags they encounter - and he pulls it off in style. Petit's feat was achieved when he was just under 25.

It's amazing how something seizes your imagination and becomes your life purpose. All else becomes secondary and your only focus is that goal. The madness of the idea fuels the kind of preparation that only someone like that can put in. Consumed by his idea, Petit draws everyone into his dream. One understands when he first steps on the rope why Papa Rudy says it is a 'beautiful thing'. In that moment one feels the beauty and honesty of that act, that thought. Petit becomes one with the balancing rod, the wire, the towers, the earth, the clouds and the sky, and as we watch we become one with all that too. The lessons that Papa Rudy teaches - of gratitude, of honesty, of arrogance, of preparation, of attention to detail and of deeply felt connection to the wire void - serve Petit well. On the wire he feels that immense gratitude. All artists would feel that.

Petit talks of his connection with the void, with his circle, with his space which is interesting. Hopefully I can read his book and get a first hand look into his mind and his thoughts. His obsession with the wire, his costume, the equipment borders on selfishness but then its that kind of an obsession that sparks such acts. The connection between danger and beauty, life and death, peace and anarchy, artistry and creation shows up.

It's the perfect movie to watch for our corporate teams. The huge goal, the preparation, the mad desire to achieve it come what may, the setting oneself up for something of that scale and then delivering it are all lessons to draw. But then not everyone can become a Petit. Wonder why it took so long to make this movie. One 3d moment when Petit first suffers a fall, his only fall apparently, and the balancing pole hurtles at your eye. Papa Rudy tells him that most high wire artists who die, fall in the last three steps - they think they have arrived but they still have three more steps to walk. You have never arrived until you have.