Every year Daksha organises one big annual event - either an annual cultural day or a sports day. This year was the sports day. Also being the 10th year since Daksha came into existence, it was special for many reasons. What started, as Anita shared 'with 3 children and 2 teachers' has now grown into a school of 400 children that is known for its commitment to right education, values and all that should be right in a school. From nutrition to yoga, values to exposure, Anita and her team are constantly thinking up ways to improve delivery, to engage children better and facilitate their growth. Much of the work and intent is on display in these annual events - Anita's complete focus and first priority is her chidren, her kind and encouraging attitude to all of them whether they perform well or not, her support to her team, the teachers' commitment to their goups, the helpers and even the children who were quite magnificent in their patience and performance.
The numbers are growing, so even the large Kotla Vijaya Bhaskar Reddy stadium was filled - at least in the car parking aspect. The show started at 4 pm. Anjali was part of the yoga, the skating display and an aerobic dance at the end - so we settled down to a 3 and a half hour show. The children and the teachers have been preparing for almost two months. Costumes, choreography, theme, props, practice, venue, sound, music, lights, invites - it all has to fall in place exactly right. And it showed as always. When the effort is complete and you know it, the result does not matter anyway because you have given your best. Most times the result is positive.
The day's events comprised of - Yoga, Butterflies and honeybees race, Color race, Journey that shall never end, Alphabet race, Number race, Fitness all the way, Good food race, Relay race, Kung fu presentation, Skating display, Dress up well race, Environment is the theme, Complementary pairs, Animals race, Friendship theme, Its my creative world, Class I aerobics Happiness, Class 2 Brahmaguptas - we have the zing, we have the zeal, Class III and IV - Proud to be indians, We are Team India and the March past at the end.
As always the sections that included the younger ones brought loud laughs and great joy at the energy and innocence the little ones displayed. The older kids, including Anjali's class, really astounded us with performances that made us go Wow. One cannot help but think about how much preparation has gone into it, how well children respond to responsibility.
Apart from the preparation and fun aspects, two things stood out to me this year. One is the way Daksha integrates special children into each class. Though it is not a school for special children the way they integrate a child in every class stands out. For one, the way the other children accept diversity is such a huge learning at this age. They take it so beautifully in their stride. In ways that are so casual but so clear, the children take care of their special friends without making him or her feel less than. In one performance the children brought Saketh (I think) on to the forefront of the dance. I could see the teacher want to stop them from bringing him out into the forefront of the dance - more out of concern perhaps - and then she stopped and let them do what they could. The children, one boy and a girl, gently found their way around other dancers and brought him up front. Every other child intuitively made space and Saketh stood and swayed to the music with the rest. It was a sight that fills your heart. While doing yoga, the same young man with a resilient heart, sat on his chair and participated with gusto.
He let no activity go and did what he could at his own beat and time. Similarly Akhil skated along with the skating group and completed it at his own pace. The people in the arena allowed them to do their thing at their pace and beat which shows the compassion, maturity and thought that surrounds the place. When children see their teachers behaving in this fashion, they follow such behaviors forever. Its wonderful.

Secondly, some of the moves that the children displayed in kung fu, yoga, aerobics really had a wow factor to them. All credit to the teachers and instructors. And mostly the children. 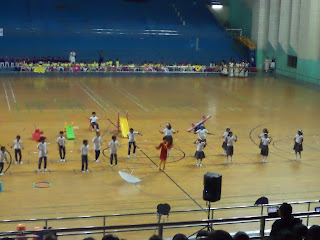 Everyone was acknowledged and awarded with a medal for their participation. The lights went off, but this time the situation was retrieved fast. The program went on past half past eight but no one was complaining.
As one parent put it, it is increasingly evident that Anita has these wonderful leadership qualities where she draws followers to her who are loyal committed and who go that extra mile for her. It can only reflect Anita, Kamakashi, Radhika and the rest of the team (which includes Mansi's mother Pavani and Harsh's mother Vaishali).
There is much to learn from her approach, her composure under pressure, her preparation and mostly her commitment. She is one person who is clear about her why, her purpose - and such journeys end far beyond what we can imagine.
I was telling Kiran as we sat in the gallery that in a few years Anita should contest the elections. We badly need leaders like her. Young architect and aspiring politician Naveen Yadav, who had been Radhika's student, and who helps the school out when he can, spoke of the great commitment of Anita and Radhika and his desire to help the team in whichever way he can.

Shobha and I had fun watching the show. Mythily joined us. We ate our biscuits, drank the free chai that Daksha provided and throughly enjoyed the program. There was a guy who made a killing selling popcorn.