Watched Sacha Baron's 'Borat'. The real name of the movie actually is rather long - "Borat: Cultural Learnings of America for Make Benefit Glorious Nation of Kazakhstan". The movie revolves around Borat Sagdiyev, who is a television presenter in Kazakhstan. He has been sent to the USA to interact with Americans and make a documentary for the Kazakh Ministry of Information. He travels with Azamat, the producer and his pet chicken. Clearly there is a big cultural gap between the Borat and the Americans. 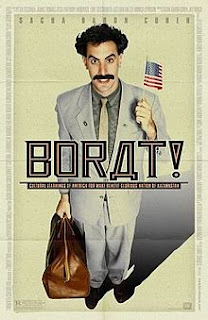 The movie had no real script apparently and many characters that appear in the movie are not actors but real life people. Anyway Borat and Azamat go to New York first where Borat discovers Pamela Anderson while watching Baywatch on television and falls in love with her. He also hears of his wife's death via telegram, that she was attacked by a bear in a  forest near their home, and feels that he can now take Pamela as his new wife. He convinces Azamat to shift the shooting to California. Azamat does not understand why but they finally start their journey in a second had ice cream truck. Along the way Borat meets many Americans - the young, the gays, the religious, the etiquette coaches, a prostitute, radio stations and so on. Until one day he has a naked fight with Azamat whom he catches masturbating over a Baywatch picture. A disgruntled Azamat disappears with Borat's passport and money etc. Borat meanwhile discovers that Pamela Anderson may not be a virgin while travelling with a bunch of college going boys and is totally distressed. Anyway he does meet her at a book signing and tries to kidnap her to make her his wife. He is caught and sent back. Before all this however he meets Azamat again. Borat goes back to Kazakhstan with a new bride despite not getting Pamela Anderson - he takes home the prostitute he meets on the way.

Borat apparently got good reviews and nominations. It was not very funny for me. Passable.

Posted by Harimohan at 9:54 AM