The first thing you register when you read this book (faber and faber, 405 p) , a series of interviews with Woody Allen by Stig Bjorkman, is that my god, Woody Allen is so different from the image we take away from the movies or books. Woody is dead serious about his comedy, his work and that shows through in this interviews - no frivolous talk, no needless jokes - everything is cut and dry and straight to the point. One of the acclaimed comedy movie makers and one who has set his own path, his trademark style be it in movie making or in his books, Woody Allen comes across as a thorough professional who takes his work of making films and making people laugh very seriously. 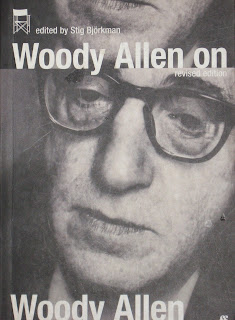 The director, actor, writer, playwright, musician and comedian, Woody Allen has produced and acted in so many hit movies such as 'Take the money and run', 'Annie Hall', 'Mighty Aphrodite', 'Curse of the Jade Scorpion','Manhattan'. 'Crimes and Misdemeanours', 'Husbands and Wives' and has over 35 years of filmmaking experience. What I did not know or realise about Woody Allen was that he had a huge body of work made possible by his approach to work. He writes, makes the movie and then once it is over, starts writing the next movie and makes that one. Sometimes while making one movie, he made another. His whole idea is to make movies the way he wanted to, or as closely as he could, and get on. No time for reviews, no time for parties or socialising. Allen says he is not the kind who spends time with his actors and actresses by meeting them over dinners and stuff. He meets them almost directly at the shoot.

From a normal and ordinary Jewish childhood in Manhattan, Allen, a self-confessed sports fan, and a very athletic man as well, took to writing comedy early on. He started doing well as a comedian and then made his entry in movies. He admits to watching a lot of movies with his cousin when he was young and very happy doing that. He has a healthy respect for the Fellini's and the Ingmar Bergman's of the world. He dwells a lot on his cameramen with whom he shares a close rapport - di Palma, Gordon Willis etc. Allen also pretty much uses the same team of people.

He comes across as someone who really has no time for all this. All he wants to do is make movies and do what he likes to do  which seems pretty much like watching sports, playing the clarinet every Monday in a club with his jazz band, writing for movies and acting and directing in them. He says he never reads reviews of his movies and has not done so for over thirty years now, does not sit back and party after the movie is done and instead gets on with his next movie, believes that content is the main thing and works and works and works on nothing else but the movies. Known for the number of Academy Awards his movies have earned for his actors and actresses, Allen himself has won several (does not go to Award functions also, and made one appearance in 2002 after the 9/11 bombing to urge film director's to make movies in New York) been nominated the maximum number of times by the Academy Awards for original screenplay writing. A man who has had a tumultuous personal life with his many marriages behind him, some which have been controversial, Allen again appears to be friendly with his ex-wives and works with them whenever there is a part that fits them.

It was interesting to know how he goes about his work, to see his passion towards his work of filmmaking, to make such a large body of work with such commitment. He seems to make what he wants for the pleasure of making it, in fact he says that the best part is when the idea comes to him, and then he writes and makes the movie and then on to the next. Fame and recognition and money according to him will come if one keeps working and working and working and that is what he does. I have seen a few of his movies and now it is time to revisit the whole bunch once again. It is an easy read though with Allen's responses being so clear, crisp and to the point and never ever digressing from the main issue. Certainly much to take away for directors as well because there is much technical work discussed and also ow he approaches making his movies, sets, locations, music, artists, costumes and the like. If anything, it gives a good idea into the facet of Allen he technician, a facet that he chooses to show to the extent he feels necessary.
Posted by Harimohan at 6:12 AM

saw a Special on Woody Allen by chance on TV the day before. He spoke about his films, and there were excerpts. A good one on UTV World Movies, which they might repeat.

Will try and catch it. There a about seven or eight of his movies with me that we could catch up on. Some really interesting stuff!