Watched 'Chariots of Fire' for the second time - this time with utmost concentration the other day. I have been hearing Vangelis's music score for the movie for more than twenty odd years now, since the days I was a dreamy eyed Engineering student and it featured first in a tape I loved dearly those days, but it was only last year that I laid my hands on the DVD. The first time I watched the movie was a rather scratchy affair with a bad sound system so I could not get most of what was happening - but this time it was good and it enthralled me. 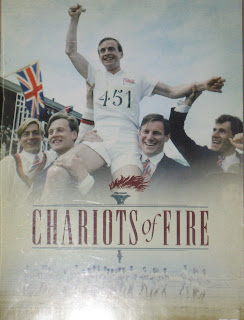 'Chariots of Fire' (1981) and is the real life story of two athletes who run for Great Britain in the 1924 Olympics - Eric Liddell the Scottish missionary who runs because he thinks that is what God gave him his speed for, and Harold Abrahams, a Jew, who runs to fight prejudice and more than that, to pursue his search for excellence - to be the fastest man. The movie begins with Lord Lindsay, a colleague and friend of Harold's from Cambridge, recounting his association with Harold Abrahams at Harold's funeral service in 1978, and their years at Cambridge circa 1924.

Fresh in Cambridge, Harold is joined by a bunch of young athletes, Lindsay, the aristocrat, Stallard and Aubrey Montague, who all turn out to be the best of friends - from the time Harold and Lindsay run the Trinity Court Run together. Harold's desire to be the fastest athlete is known and the college and his friends expect great things from him. But when he meets the Flying Scot Eric Lidddell in a race and is beaten thoroughly, the arrogant and defiant Harold is almost heartbroken. He realises that he needs to work harder to realise his goal. To beat the Scotsman and others in that league.

That is when the movie got more interesting for me. Harold, desperate to better himself, seeks Sam Mussabini, a professional athletic coach and begs him to coach him. Mussabini says that athletes are like brides and they must wait for the coach (the groom) to propose and not the other way round. But eventually Sam decides to coach Harold and it is fascinating how he teaches him such wonderful techniques that make sense in our lives. 'Over striding is the worst thing,' he says and makes Harold practice running within his stride, within his God given limits and push within that. Always within, never by overreaching. Ah, wonderful philosophy. 'Head straight, never glance sideways,' is another gem which though a technicality, tells much of much we lose by concerning ourselves about the progress of the guy next to you. Things that don't concern you - and you can lose a race for precisely that. And so many more things that I loved in that coaching part. 'From now on,' says Sam to Harold when he takes the assignment. 'I want to to think of Eric, Paddock and Scholz (the three great sprinters of that ers) leering at you.' Eric Liddell trains by himself in Scotland, running for the glory of God and astounding many with his speed.

Both Eric Liddell and Harold Abrahams are selected to represent Great Britain at the 1924 Paris Olympics along with the others. On the ship Eric, the devout missionary and a certain medal prospect, learns that the first heat of the 100 metres, is on a Sunday. He refuses to run the heat saying Sabbath is for the Lord and his decision throws the entire contingent into a frenzy. Despite everyone, including the royalty, convincing him otherwise, he refuses. Harold has to race alone against Paddock and Scholz, the American heroes who are favoured to destroy all else. Harold qualifies for the final of the 100 metres though Paddock takes the honours in the 200 meters heats. Lord Lindsay wins his event, 400 metres hurdles and brings home a bronze, the first medal. He also proposes that he would like Liddell to run his other race, the 400 metres, which is on Thursday 'just to he can watch Liddell run'. Aubrey loses his steeplechase event, but Harold Abrahams scorches the track and his demons as he beats Paddock and all else in the 100 m final. And in an event that is not his, Eric Liddell demolishes all opposition in his 400 m run, running in that strange fashion of his, for his God.

Truth is always stranger than fiction. Seeing this movie, or Invictus, I wonder how these wins were possible. What kind of men were they? Ben Cross and Ian Charleson, as Harold and Liddell are perfect. Liddell apparently went to China as promised, to preach, and died in the World War II, while Harold went on to achieve greater glory in sports and administration in England. It is a fantastic movie, a wonderful story that is told very well. Must watch if you get the chance!
Posted by Harimohan at 11:58 AM