This is an important book for these times mainly because, in a world that is slowly but steadily losing ground to all things cooperative, compassionate and unselfish, Subir has the courage to put himself out there and say that the difference between improving incrementally and exponentially is the 'caring mindset'. Subir clearly states that those who fail to adopt the caring mindset will fall behind in innovation, employee engagement and productivity. 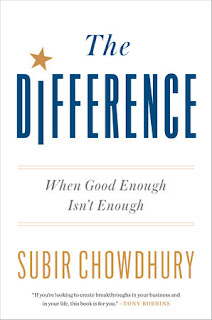 The book's tag line is - when good isn't good enough. That got me started on all the things I was doing a 'good' job of. Subir explains through examples how when people stop caring - about their work, about others and about themselves, things start to go into a decline. A fine story - a senior executive calls him in a panic and talks about how their quality ratings reports were bad. He was more concerned to see toothpicks on the floor in the office. 'They just don't care any more,' he says and agonises over it. Subir, in his own way, speaks sense to the management about how they had stopped caring about themselves, their own employees, processes and landed themselves into this mess. The key was to bring back a caring mindset - starting with themselves. Subir reminds us to pick up the trash on the sidewalk, helped a friend through a difficult time etc. Practice the caring mindset he says - to grow exponentially. Subir knows what he is talking. How many toothpicks do you see in a day he asks?

The key to the caring mindset he says comes from developing the STAR culture - Straightforward, Thoughtful, Accountable and Resolve.

Subir says being Straightforward and open is the way forward as opposed to being dishonest and deceitful. he cites examples of a go-getter boss who suddenly discovers he has little time to live and wants to seek forgiveness from a former colleague for the way he had treated her - and he does. So much efficiency is lost in dishonesty adding that much more cost - all it takes is for the leaders to set an example by practicing being straightforward - being upfront, honest and accepting mistakes when they are made. Overall Subir feels that people (and organisations) are not straightforward because of fear, greed or pride.

Thoughtful is the next value or behavior to practice. He gives the example of how the flight attendant in a flight refuses to give water to an old man who is thirsty because the rules forbid her to serve the coach class before the flight takes off - and a young man flying first-class simply goes up and gives the old man a glass of water. Subir feels that being thoughtful is a two-step process - the first being able to listen to others and to put yourself in their shoes and second is being empathetic. Subir urges us to look for those who need a 'glass of water' and go out and help them. He asks us o look at the world through someone else's eyes, to truly listen to others to get over our differences.

Accountable is the next quality and the five factors the are involved are 1) being aware that something needs to be done 2) taking personal responsibility for it 3) making a decision to act 4) thinking deeply about the potential consequences of the action and 5) setting high expectations. Subir cites a lovely personal story where a teacher from his daughter's school writes a letter that is too harsh for the eleven-year-old. Subir held himself accountable to rectify the system - not by blaming the teacher but by taking purposeful action to correct the malaise. He met the development officer, asked about when the teachers were last trained on the school's core values, offered to pay for the cost of getting the leading instructor in the business of teaching core values and got the job done. That is true accountability - getting the best outcome. Another wonderful story is that of how a woman has a flat and is stuck on a Sunday evening. She finds a closed tire shop, calls the number on it, and soon enough a young man arrives, fixes everything and when she offers to pay, refuses saying 'he does not work on Sundays so he need not get paid'. She is thrilled to bits and when she tells her husband he decides to go and change all his tires at the car tire shop! (I did the same thing with this young man who took good care of my old glasses and repaired them for free instead of hustling me into buying a new one - and within a week I bought a pair of glasses from the same guy!) Another story Subir cites is that of the janitor who keeps the cleanest toilet in the airport and tells Subir that whichever toilet he works on, people can make out the difference. Subir asks, in what part of your life is it most important to take accountability now? Are you setting your sights high?

Resolve is the fourth quality and Subir's own story of how he flew to the US expecting an assistantship and how shattered he was at finding that it was not to be - but how he knocked on the doors of every single department until he got a fellowship. Subir points out that a key part of resolve is a willingness to change and adapt. Clearly, that's how 10x happens  - you will not get exponential results if you do the same thing - you must adapt. Another great story highlighting the importance of resolve is how US Congressman Jim Barcia went to great lengths to ensure that Subir's parents got the US Visa so they could witness him receiving the Automotive Hall of Fame's Young Leadership and Excellence Award. It's simply the quality of not giving up until you achieve what you set out to  (and he says - good enough isn't good enough) so reach for the stars!

I like the way he drives home the point through stories - about his childhood in Bangladesh, stories of his father, mother and grandfather, from the janitor, the car tire shop owner, the executive who lost touch with his daughters, the CEO who discovered he had little time left to live, the nurse who did her job diligently, the Congressman who did not give up on his promise, the bankrupt company that paid its dues before declaring bankruptcy, the doctor who sent a nurse out with a message to reassure the anxious husband - lovely stories.

I completely agree with everything Subir says and I believe it is the way forward for us as a race. To be more honest, thoughtful, accountable and resolute - to take the bull by the horns, to see it out to the best outcome possible, to be gentle while doing it but not giving up ever. In a world that's clamouring for blood, that's full of deceit and dishonesty, where leaders at the world level are lying through their teeth and are far away from being straightforward, thoughtful accountable and resolute about making positive change, this is a wonderful book that puts life into perspective. We do not need adrenaline pumping - we need a caring mindset. We need leaders who care about people - all people - not just one section. We need them to care about people as a whole and work to unite them, to create harmony, to be compassionate about the world. And in the hope that it will spawn leaders like that - I wish wholeheartedly that Subir's book reaches the far ends of the earth and change the way we think, the way the future generations think. Do read.

About Subir
Subir is a bestselling author with 15 books (business - mostly themes around quality and productivity), is a sought after speaker and thought leader (is in the top 50 most influential thinkers list). He is a leading management consultant and one of the last words in quality. He is also the Chairman of ASI Consulting Group based in the USA, which deals with Strategic Initiatives, Quality Counseling, and Training.

Subir does a lot of philanthropic work –the Subir Chowdhury School of Quality and Reliability at IIT, Kharagpur, the Subir Chowdhury Fellowship on Quality and Economics at the London School of Economics, the Subir Chowdhury Fellowship on Quality and Economics at Harvard University, the Subir and Malini Chowdhury for Bangladesh Studies at the University of California, Berkeley, Global Quality Awareness, a non-profit initiative of the Subir and Malini Chowdhury Foundation (to improve the lives of individuals and communities) and the Frances Hesselbein Medal for Excellence in Leadership and Service by the Subir and Malini Chowdhury Foundation are some such initiatives. Among the many awards and recognitions he has received are the Outstanding American by Choice Award by the US Government and the Thinkers 50 nomination (many more awards, too many to list). Subir is also a heritage collector of rare Indian artworks by eminent Indian artists like Rabindranath Tagore, Nandalal Bose, Jamini Roy, Abanindranath Tagore as well as western artists like Monet, Rodin, Renoir.

Glancing through Subir’s list of books you realise how much he believes in greater efficiencies and in all the factors that go into individual and organisational productivity. His books include ‘Robust Engineering’, ‘Design for 6 Sigma’, ‘Management 21 C’, ‘Organisation 21 C’, ‘Power of Six Sigma’, ‘Taguchi’s Quality Engineering’, ‘New Generation Business’, ‘Talent Era’, ‘Ice Cream Maker’, ‘Power of LEO’, ‘Robust Optimisation’ and ‘The Difference’.
Posted by Harimohan at 10:31 PM