Sridhar makes great book suggestions (just like Rajesh Janwadkar does and so does Suresh Reddy). He advised me to read 'The Inner Game of Tennis' and I loved it. So when he asked me to read 'Decisive' I got it quickly. 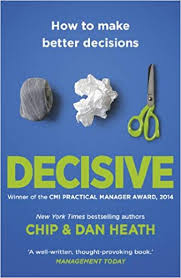 Chip and Dan Heath establish how we make our decisions and give us a process to help us make better decisions. The book has wonderful cases studies and stories that we can relate to and understand the process better. Deciding between two jobs, deciding on getting into a long term relationship, buying two stereos, taking a life-threatening medical procedure, deciding whether to shift focus from one business line to another..it has great examples.

The book begins with an anecdote where a person asks Benjamin Franklin for advise when he is caught in a dilemma. Franklin asks him to fold a paper in two, write the pros on one side and the cons on another, strike off pros and cons that seem to match, and decide on what's left. Of course the authors don't ask us to follow Franklin's process but it's better than not having a process at all.

The four villains that come in the way of good decision making are
1) narrow framing (which is about taking a yes' or a 'no' decision without considering other options) also called the 'spotlight' problem because you don't see other options around it
2) Confirmation bias (which is self-serving as you use new evidence to prove what you already think or believe is right)
3) Short term emotion (hijacks decision-making process)
4) Overconfidence
We have all been guilty of all four. I certainly have.

I will list a few principles and tools written in the book that might help as a quick guide.

Widen Your Options
- Avoid narrow framing (Avoid Yes or No decisions)
(Consider more than one alternative before you decide. It improves your decision-making process tremendously. Ask questions like 'Is there a better way' or 'what else can we do'. Distrust 'Yes' or 'No' decisions.)

- Consider the opportunity costs. They give a clearer idea of options available.

- Use the vanishing Options Test
(what if you cannot choose any options that you are currently considering. What else can you do? When options disappear we move our spotlight.)

The advantages of multi-tracking, or using more options to solve the same problem, are beneficial even in business as it was found that executives who weigh more options make faster decisions and are less invested egoistically because there is more than one choice. Also, there is a fallback plan.

- Push for this AND that instead of this OR that. (Even when there are Prevention-focused and Promotion-focused dilemmas, try for both)

- Look for analogies, look inside, find your bright spots - you may have dealt with similar stuff before

- Learn to ask the right questions, disconfirming questions
There's this wonderful story of a patient who complains of being dizzy and no test finds out what is wrong with him until one doctor asks him to describe how he feels - he says he feels very sad ever since his wife died, very dizzy. In extreme disconfirming questions, you consider the opposite of your instincts (an example of for couples who are about to split up - they are asked to write marriage diaries chronicling things that the mate did which pleased them)

- When you need trustworthy information go find an expert, someone who is more experienced than you
(but stay in the present and past not the future...experts are lousy at predictions)

- Balance the inside view with the outside view.
A close up can add texture
Best information = Outside view + Close up

- Run small tests to test your theories - don't jump all in. We're bad at predicting, so try out first. The principle is why predict when you can know (Example, instead of interviewing candidates ask them to generate sample work)

Attain Distance Before Deciding
- 10/10/10 formula - ask yourself whether you will be ok with your decision ten minutes from now, ten months from now and ten years from now

- Look from an observer's perspective

Prepare To Be Wrong
- Bookend the future between dire scenario - rosy scenario.
For dire scenarios conduct a Premortem by asking a question as if the worst has already happened and what are the areas to watch out for. Similarly, get ready for the Prepade by foreseeing the rosiest scenario and preparing for it. This works in places where outcomes can be foreseen.
(An example is of a company that gives the employee the worst scenario on the job so the employee is prepared for what to expect). The future is a spectrum of possibilities and not a single possibility so conduct a premortem and prepare for the lower bookend

- Set up Tripwires to warn you.
Question past decisions. Create deadlines or partitions to help create a distance from the emotion. Tripwires create a safe space for risktaking by 1) capping your risk and 2) quieting your mind until the trigger is hit.
(A classic tripwire is the one set by rock band Van Halen which had elaborate set ups for their concerts and to make sure it was all in good hands they had a clause in their contract with the stage managers that there should not be a single brown M&M backstage - if they found one they knew that the contractors were not careful enough and they needed to be doubly careful). Powerful tripwires are triggered by patterns - emotions - like 'call if you find something worrying saved many lives in a children's hospital - not everything troublesome can be articulated.

There is a part in the final chapter about how group decisions are made and how they are influenced. There is one technique that someone shares - that he got people to agree with him by actually finding good stuff about their proposals and finding bad things about his own. This is a powerful technique that makes the other person feel secure and then it's easier to deal with them.

Overall the authors say that you are better off with a process, a few tools, and you may be right more often than wrong. So trust the process. They end with a nice note - that when asked their biggest regrets in life old people often said that they never regretted what they did, but they regretted the things they did not do.

So, there is a case for action bias when making decisions it looks like (as Wayne's rules state - 'Have a bias for action' and 'Be easy to do business with' are guidelines he gave his team). Decisive is a must-read. There are so many examples that make the reader understand exactly what they are trying to convey. Can be of great help to people of all kinds of ages.

Thanks Sridhar for recommending it to me. I recommend it too.