Bill Bryson travels to the United Kingdom/ Great Britain/ England after a long break of more than a decade and decides to wander around and perhaps collect material for this book. he travels from Dover to Exeter, Oxford, Bradford, Ludlow, Porthmadog, Liverpool, Durham,  Edinburgh, Aberdeen, Halkirk, John O'Groats, Inverness, Glasgow, Carlisle and hops off the island. The details are thanks to a useful map he provided right up front. 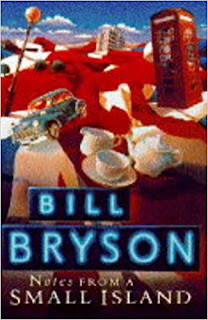 I enjoyed reading Bill Bryson again - I was a bit put of when he wrote the Short history. I realised he had this sneaky sense of humour that you miss when you don't pay attention. He will be bumbling about and suddenly there's this very funny line that you will miss if you don't pay attention but which you will suddenly catch out of the blue. He hates to part with his money, wants cheap travel and cheap hotels, does not want to pay for those brochures or stuff like that. He bumps into several specimens of the country, not all of them hospitable - the first landlady was unforgettable, as is the one he shouts at when locked out on a rainy night. But just as I was wondering if he had run out of laugh-out-loud stories he came up with this conversation he has in Glasgow with some Scotsmen in a bar and those two pages are stuff I want to photograph and read everyday for my dose of daily laughter.

Bill is immensely pleased with the British manners, their orderliness, their way of apologising even when they have been hurt, their refined sense of humour. He is unhappy with the disappearing telephone boxes, their incongruous new age architecture, all the entry fees, lack of transportation facilities etc.

All in all a very enjoyable read and I am back to being a Bill Bryson fan again and am all set to read the next book I have of his - A Walk in the Woods or something like that. I think I saw the movie made on that with Robert Redford and a brilliant Nick Nolte.
Posted by Harimohan at 11:51 PM