Anjali - The Giving Tree and A Promise

Anjali joined a summer camp oganised by the Hindu called STEP Junior League. One of their exercises was to identify someone in their life who is their giving tree. Luckily for me Shobha was away doing some adventurous stuff so Anjali conferred the title on me. I am naturally very pleased with this award of the giving tree. 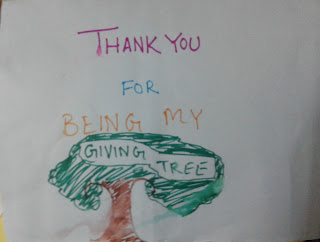 Thank you Anjali for making me realise that I am capable of giving. Thank you for receiving. And some more. A line that binds me for a lifelong commitment. "You are always there for me". 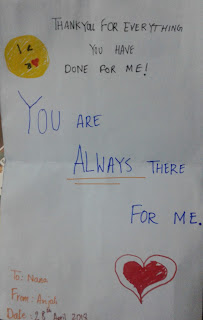 I am reminded of this story in the first edition of the Chicken Soup series about a young boy and his friend in Armenia. An 8.2 scale earthquake flattens the entire country including the school where the boy is studying. His father goes to the school to find his son and finds flattened buildings. There is no hope but he remembers his promise to his son. "No matter what happens, I  will always be there for you.'
He started digging. To those who told him it was pointless, he only responded - 'Are you going to help me now?' He dug for 38 hours, alone. And then he heard a voice.
His son's.
The boy says - 'I told the others you would come if you were alive Dad. And that when you saved me they would be saved too.' The young son told him that 14 out of the 33 survived because of a wedge that formed in the building when it crashed.
When the father tells his son to come out, the boy lets the others go first.
'Let them got first Dad,' he says. 'Because I know you will get me. No matter what, I know you will be there for me.'

Anjali, I don't know if I said  it before and like so many other things it's you who prods me first - but no matter what, I will always be there for you.

Thanks Chicken Soup.  Lovely story. Thanks Anjali. Lovely card.
Posted by Harimohan at 9:47 AM