Yesterday evening I told Anjali I wanted to go to the park for a run. She could come along with me. Over the past two months I slowly increased my exercise routine from a walk plus 100 meters, 200 meters, 300 meters, to 500 meters to about 1 km now. I am enjoying it too. 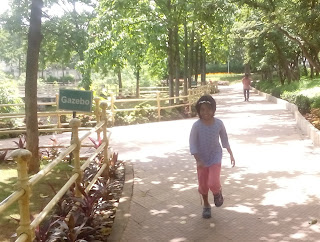 Anjali appeared in a few minutes dressed in her sporty attire complete with sports shoes. I was surprised. I thought she would sit around and watch the birds and flowers.

'I want to run with you Nanna,' she said.

We walked to the park. I told her to run as much as she could and that I would run the great distance of 1 km at my own pace. She could break off whenever she wants.
'Ok,' she said amicably and ran alongside me.

She ran faster than I did, came back, caught up with me again, chatted me up.
'I won't talk much,' I told her. 'I need to save my breath.'

'Oh,' she said and ran off. She came running back again.
'You're not lifting your knees high enough,' she told me. 'Take bigger strides.'
I smiled. Grimaced rather.

If I could, I would have.
'Look at me,' she said, showing how easily she was doing it.
I smiled again.

'No, I will run,' she said. She tired a bit. She walked alongside me, ran and caught up with me, fell back when she tired again, but she kept coming.

After some more time I told her again to take it easy. This time she was not happy.
'Arre, I am running no. Let me run. Why do you want to stop me?'

I realised what I was doing. I was giving her the easy way out with my assumption that she could not handle it. But not only did she finish the entire distance - run and walk -she also found ways to tackle to the up and down slopes.
'Take it easy on the down slopes,' she said. 'They take more energy.'

Later, we both sat on the steps sweating it out.
'I am sweating like a pig,' she said smiling with that deep satisfaction one gets after achieving something. I love that feeling too when you have sweat pouring down after a run- a public validation of your effort. It's heavenly. And she almost did not experience it thanks to me.

How many times do we take that pleasure away from them I wonder.

I was surprised at her stubborn attitude to finishing the distance, despite her tired, stumbling manner in the end. There's so much they bring to the table - and we just keeping blocking them again and again. To be more aware now - of my own limitations in the mind.

Posted by Harimohan at 4:37 PM