Article in Hans India - View from the Stands

This is an article I wrote that appeared in Hans India a couple of weeks ago. It's supposed to be funny. 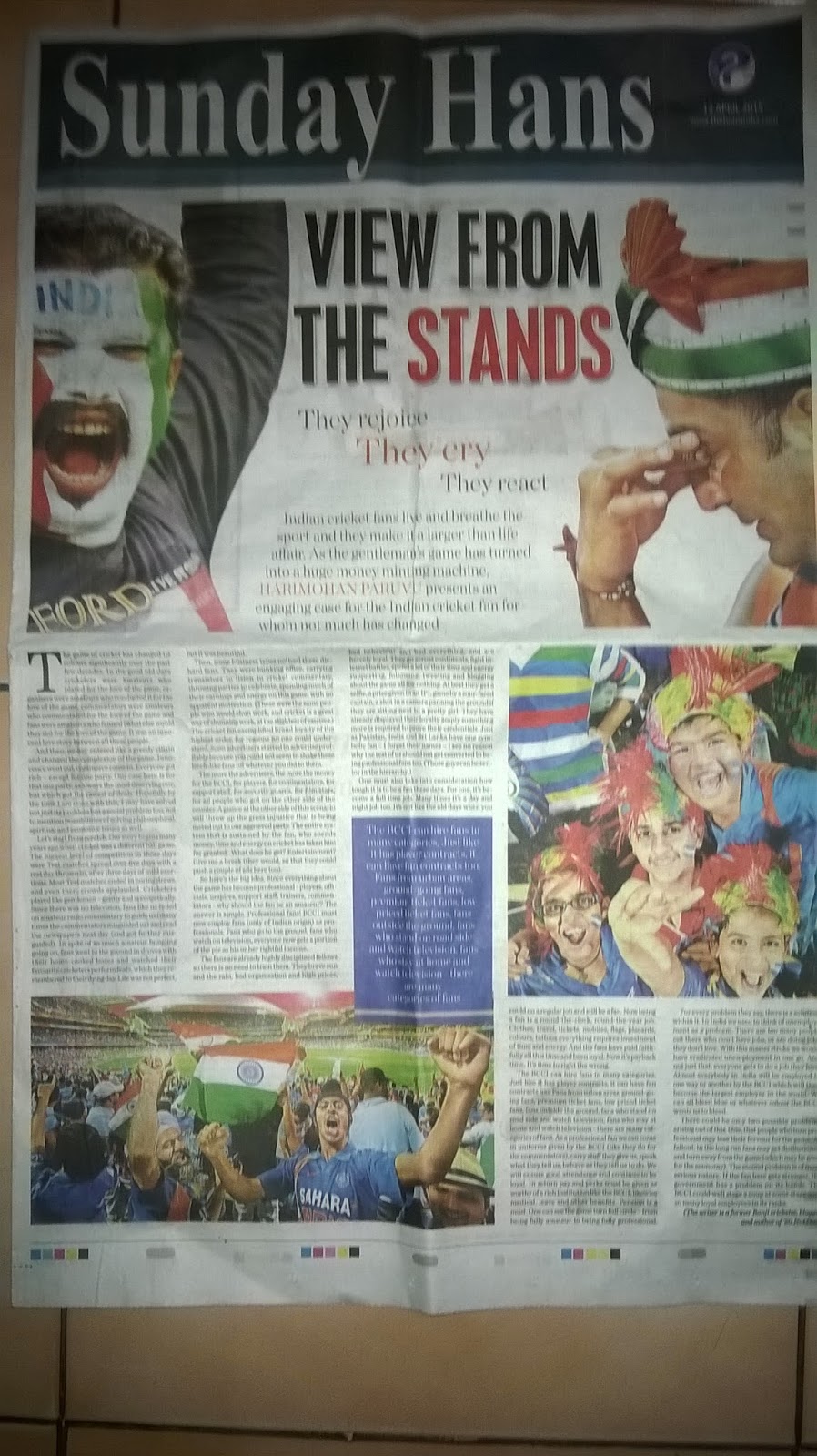 And then, money entered like a greedy villain and changed the complexion of the game. Innocence went out, commerce came in. Everyone got rich - except for one party. Our case here is for that one party, as always the most deserving one, but which got the rawest of deals. Hopefully by the time I am done with this, I may have solved not just its problem but a social problem too, not to mention possibilities of solving philosophical, spiritual and economic issues as well.

Let’s begin at the beginning. Our story begins many years ago when cricket was a different ball game. The highest level of competition in those days were Test matches spread over five days with a rest day thrown in, after three days of mild exertions. Most Test matches ended in boring draws, and even then, crowds applauded. Cricketers played like gentlemen – gently and apologetically. Since there was no television, fans like us relied on amateur radio commentary to guide us (many times the commentators misguided us) and read the newspapers next day (and got further misguided). In spite of so much amateur bungling going on, fans went to the ground in droves with their home-cooked tiffins and watched their favorite cricketers perform feats which they remembered to their dying day. Life was not perfect, but it was beautiful.

Then, some business types noticed these die-hard fans. Fans bunking office, carrying transistors to listen to cricket commentary, throwing parties to celebrate, spending much of their earnings and energy on this game, with no apparent motivation. (These were the same people who would shun work, and cricket is a great way of shunning work, at the slightest of excuses.) The cricket fan exemplified brand loyalty of the highest order, for reasons no one could understand. Soon advertisers started to advertise profitably because you could not seem  to shake these leech-like fans off whatever you did to them.

The more the advertisers, the more the money for the BCCI, for players, for commentators, for support staff, for security guards, for film stars, for all people who got on the other side of the counter. A glance at the other side of this scenario will throw up the gross injustice that is being meted out to our aggrieved party. The entire system that is sustained by the fan who spends money, time and energy on cricket has taken him for granted.  What does he get? Entertainment? Give me a break (they would, so that they could push a couple of ads here too).

So here’s the big idea. Since everything about the game has become professional - players, officials, umpires, support staff, trainers, commentators - why should the fan be an amateur? The answer is simple. Professional fans! BCCI must now employ fans (only of Indian origin) as professionals. Fans who go to the ground, fans who watch on television, everyone now gets a portion of the pie as his or her rightful income.

The fans are already highly disciplined fellows so there is no need to train them. They brave sun and the rain, bad organization and high prices, bad behavior and bad everything, and are fiercely loyal. They go across continents, fight internet battles, spend a lot of their time and energy supporting, following, tweeting and blogging about the game all for nothing. At best they get a selfie, a prize given in an IPL game by a sour-faced captain, a shot in a camera panning the ground if they are sitting next to a pretty girl. They have already displayed their loyalty amply so nothing more is required to prove their credentials. Just as Pakistan, India and Sri Lanks have one symbolic fan – I forget their names – I see no reason why the rest of us should not get converted to being professional fans too. (Those guys can be senior in the hierarchy.)

One must also take into consideration how tough it is to be a fan these days. For one, it’s become a full time job. Many times it’s a day and night job too. It’s not like the old days when you could do a regular job and still be a fan. Now being a fan is a round-the-clock, round-the-year job. Clothes, travel, tickets, mobiles, flags, placards, colors, tattoos everything requires investment of time and energy. And the fans have paid faithfully all this time and been loyal. Now it’s payback time. It’s time to right the wrong.

The BCCI can hire fans in many categories. Just like it has player contracts, it can have fan contracts too. Fans from urban areas, ground-going fans, premium ticket fans, low priced ticket fans, fans outside the ground, fans who stand on road side and watch television, fans who stay at home and watch television –there are many categories of fans. As a professional fan we can come in uniforms given by the BCCI (like they do for the commentators), carry stuff they give us, speak what they tell us, behave as they tell us to do. We will ensure good attendance and continue to be loyal. In return pay and perks must be given as worthy of a rich institution like the BCCI. Similarly medical, leave and other benefits. Pension is a must. One can see the game turn full circle – from being fully amateur to being fully professional.

For every problem they say, there is a solution within it. In India we used to think of unemployment as a problem. There are too many people out there who don’t have jobs, or are doing jobs they don’t love. With this master stroke we would have eradicated unemployment in one go. And not just that, everyone gets to do a job they love. Almost everybody in India will be employed in one way or another by the BCCI which will then become the largest employer in the world. We can all bleed blue or whatever colour the BCCI wants us to bleed.

There could be only two possible problems arising out of this. One, that people who turn professional may lose their fervor for the game. As a fallout, in the long run fans may get disillusioned and turn away from the game (which may be good for the economy). The second problem is of more serious nature. If the fan base gets stronger, the government has a problem on its hands. The BCCI could well stage a coup at some stage with so many loyal employees in its ranks."
Posted by Harimohan at 6:04 PM

wonderful idea. I may turn into a pro fan!