Directed by George Clooney, this 2005 film set in 1953, is about media ethics and the power of the media to educate and inform the genral public. Based on real life incidents, the movie is in the early days of television and showcases Edward Murrow (David Strathaim) and his team, Fred Friendly (Clooney), Joseph Wershba (Robert Downing Jr) and others, the CBS  team which attacks the junior senator from Wisconsin McCarthy and his anti Communist methods. They focus on one case of an Airforce employee, alleged to have communist links based on flimsy and non-transparent evidence that is not disclosed, who is dismissed, The pressure brought by the relentless CBS team sways public opinion, reinstates the Airforce employee, but makes it a full blown war between McCarthy, who claims to be defending the security of the nation, and Murrow, who he claims has a communist background ad is therefore a communist sympathiser. 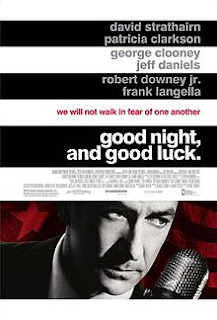 Corporate sponsorship, government harassment, aspersions from other members of the media and such does not deter the team and they go about systematically showing up McCarthy's campaign in their shows. Finally McCarthy himself is investigated and relegated to the background but not before the fight takes its toll - one of their staff commits suicide. The show itself is taken off prime time. The film ends where it started - Murrow's speech at the Radio and TV News Directors Association where he exhorts journalists not to waste the medium and use precious time and space to inform and educate the public so we have a better future. The title of the movie apparently is the sign off line of Murrow in all his shows.

Cannot expect anything less from Clooney, an intelligent man with firm convictions. The film is in black and white and has a taut screenplay and holds you glued to the screen till the end. the cast is perfect with Strathaim and Murrow outshining everyone with his fantastic powers of oration and his steely, emotionless stare. His clash with McCarthy is wonderful to watch, high on professionalism and a lesson in journalism to young reporters. Highly idealistic and I wish it would be taken seriously by young journalists as well. It captures the wave of anti-communist mood that swept the US in those days which was used by men like McCarthy. Wonderful picture, if you like that kind of stuff (I do), and I loved the way Clooney kept the story so tight despite its many limitations of space, locations and even dramatisation.
Posted by Harimohan at 2:59 PM