One Day Workshop - Department of Dance, University of Hyderabad 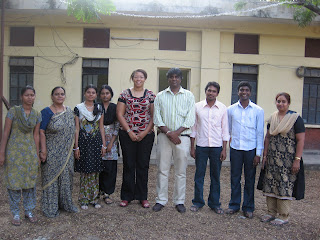 I did a one-day workshop, a compressed version of 'Recognizing Excellence Within' for the 2nd year students of the Department of Dance, Sarojini Naidu School of Performing Arts, Fine Arts and Communication, University of Hyderabad yesterday, the 15th February 2010. I was pretty confident that the program could be made modular - a one hour talk, a two hour workshop/talk, a half day program, a one day program, a two day and a three day program - conveying the core message of pursuing excellence or, of being the best one can be.
The class size was small - seven - which made it easier. What made it better was that they were all punctual and very eager to learn. Archana, Surekha and Priyadarshini were students of Bharatnatyam, Ramakrishna, Radhika and Vijayalakshmi were students of Kuchipudi and Mallesh was a student of folk dancing and western dancing. We started off at 940 am. Treena joined us a few minutes later and she assisted/participated in the program which was a great help.
To do 15 handouts that ask some tough soul-searching questions in the course of one day is quite tough and I was amazed at the interest level that the class sustained throughout the day - even during the most difficult sessions such as making detailed action plans. In the end it all was worth it when they came and shared their experience. Mallesh driving home the point that he became aware that he had so many more marketable talents that he never thought of. Vijayalakshmi was thrilled at her husband's reaction, Surekha's gradual evolution during the day, Archana's clarity of her goal and her sustained enthusiasm, Radhika's vision and her future plans for her school, Ramakrishna's clarity of purpose and Priyadarshini's awareness of her strengths.
Ms. Madhavi Puranam sat patiently throughout the day while the sessions were in progress and it was entirely due to her initiative that this workshop was possible. I am glad that the Department is making these efforts to expose the students to management, marketing and other areas which they are normally not, because I think it adds depth to their expression. It is one thing to know and practice dance, and another to know and emote what one has experienced in life. It is good to be exposed to all aspects, commercial, creative, scientific etc because it helps be a whole person. In fact the initiative by Dr. Jyothi of the School of Management is also laudable because she was keen that the first year students be exposed to the workshop. I am impressed by the faculty of the University of Hyderabad and their endeavour to give their students that extra bit.
So thank you University of Hyderabad, Ms. Anuradha J, Head of Department, Ms. Madhavi Puranam, Treena and all the students. I really enjoyed the experience and as always I learnt much more from the session than what I gave!
Thank you all!
Posted by Harimohan at 9:46 AM