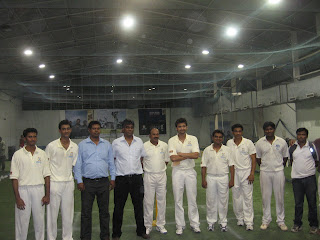 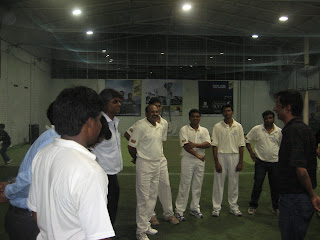 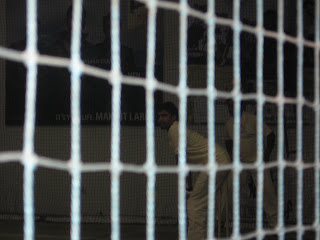 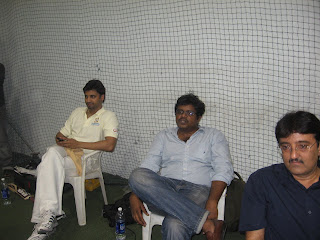 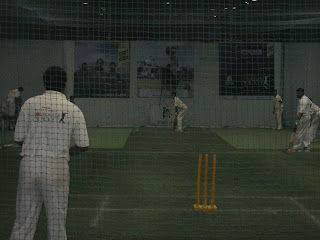 Pawan and Sreenivas in action
Our team Art Beat Capital, (the production house which is making 'The Men Within' into a movie) played its second round robin match last night. It was a must-win situation because we need to win all remaining matches in the round robin to be in contention for the semi final berth. The Bengaluru team that beat us in the first match is already through and our chances now lie in how other teams perform. In such a situation, we took the field.
I opted out, having pulled a hamstring muscle badly in the first game. I also felt that the younger and more flexible have a better chance at turning this game around. So the final eight for the game was as follows - Sanjay alias Military (captain), Gajanand Reddy, Suryaprakash, Pawan, Shilpi, Sreenivas and Ramesh and Sumanth (the likely lead in the movie) stepping in to replace me and Ramesh. We lost the toss and the opponents chose to bowl.
We started with Pawan and Sreenivas as the opening pair. We knew we had to minimise the dismissals and that was drilled into each pair. The opening pair did a fairly okay job until they got that strange illness of a rash of run outs again - four - and still managed to put up 14 on the board. The second pair of Gajanand and Ramesh went in with low expectations and did a wonderful job - only one dismissal - and added 35 runs! The score was 47 by the time they finished their 4 overs and it included one rousing six by Gajanand. Sanjay went in next paired wih Sumanth and once again, after a couple of early dismissals, they rallied round to add 34 runs in their four overs to take our total to 81 with only two dismissals. Sanjay got a great six as well. We were on target for over 120 runs in our innings when Suri and Shilpi walked in. But a series of run outs and dismissals - about five in all - set this pair back - and we wound up with 91 on board with 12 dismissals. A competitive total certanly but by no means not a matchwinning total.
When the opponents batted we had Gajanand bowl the first over. Shilpi bowled the second. Suri bowled the third and so on. We got a few run outs early thanks to the younger team. Our catching could have been better and Sanjay missed a stumping chance. The first pair put on 17, the second took it to 37 and the third to 49. Our main concern was figuring out when to bowl Sumanth. But when he got the chance, he kept it simple, and his first over got a net minus with two dismissals - a huge bonus! With the final four overs to go, the last pair needed 43 runs to get to win, and we looked like we were home on a canter but things turned out different.
Sanjay's first over got about 10 runs, Sumanth's over another 10 or so, Sreenivas bowled his over for almost the same number of runs and suddenly they were upto the last over with 14 to get which was too close to comfort. Thankfully the ball was in the able hands of Gajanand and he started off confidently with a dot ball, and a 2, 2and 2 in the next 3 balls. Eight to get in two balls and he conceded two in the next ball which meant that unless he bowled a no ball or a wide, they needed six off the last ball. Thankfully the last ball was a 2 again and we were home by 3 runs!!
Its such a huge difference when you win. Nothing compares to that feeling. We won our 60 small Royal Stag coupons at Extreme Sports Bar having won the match and decided to hold off celebrations until the next match is done.
Now on to the next match on Wednesday!
Posted by Harimohan at 8:13 AM