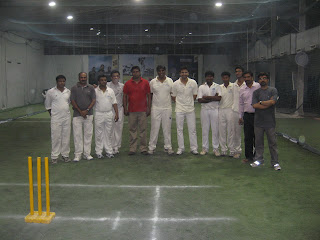 Art Beat Wins Third Game
We went into today's game facing a must-win situation. The team from Bengaluru has won 3 out of the 4 games and tops the table. If we win today's game we will be second in the pool and have a good chance of making the semi final.
We decided to play the same eight as the last match. Sreenivas took his time in coming for the game and I almost had to step in for him. But then he made it just in time and we fielded the winning team - Sanjay, Gajanand, Pawan, Suri, Shilpi, Sreenivas, Ramesh and Sumanth.
We batted first and got off to a good start. But after 2 overs when the score was eighteen, Pawan and Sreenivas got into a spate of run outs - five - and still managed to get a start of 18 for the first wicket. Gajanand and Ramesh did a good job of adding another 19 for the second wicket with another four dismissals. 39 in eight overs. Sanjay and Sumanth walked in at a dicey situation and played magnificiently adding 40 without losing a wicket even once. Sumanth was in great form with two brilliant cover drives for four, a lovely pull and some neat placements. He really looks graceful when he bats and has the gift of timing. Sanjay pulled off a fine 6 in the last over and it was 89 at the end of 12 overs. Suri and Shilpi batted sensibly to add another 14 to the score and we wound up with 103 in our 16 - a good score.
The opponents however got off to a good start adding 37 in four overs. The next pair too it to 51 in eight and the next took it to 66 in twelve. A spate of dismissals through run outs, catches and stumpings got us ahead and by the time the last four bowlers got through their overs through we were home comfortably. Sumanth bowled his off spin well, and in his two overs there were the usual run outs which we have come to expect. Suri bowled a great spell once again and Pawan complemented him well.
There is a possibility of an extra team being added to the pool which means another league match before knowing the semi line up. But we are looking good as a team now and are ready for the next match as well.
We all went down to the Extreme Sports Bar at Karkhana save Ram and Sumanth and had a good time. Mohan, Sagar and our other supporters joined us for the revelries!
Onwards then Art Beat!
Posted by Harimohan at 12:04 AM