Imtiaz Ali has a subtle idea in his head but somewhere he loses it. Sometimes it works brilliantly, sometimes it falls apart. I felt the idea fell apart in Rockstar and even in Tamasha. But that does not take away the fact that I like the idea he begins with and that he explores it. 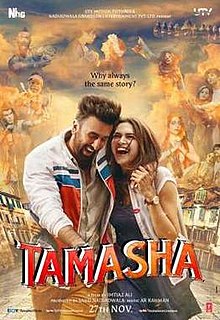 Two people meet in Corsica. Now, what kind of people would be holidaying in Corsica? I have a problem with the idea that someone as disturbed as the hero, who is constantly feeling the pressure of the authority figures in his life like his father and his boss, can actually take time off to go to Corsica to indulge himself. Anyway, that indulgence apart, the lad gets into a bipolar kind of an act - being someone he normally is not and hiding his true self. Obviously, this someone he is not normally is more interesting to the single-rich woman, Mona darling. After a series of 'live it up' or 'Don' moments - like playing pranks on unsuspecting goras, telling them boring stories, drinking water from a pool, drinking wine, thinking of having sex but not having sex (give me a break - I thought the idea was to be wild and all the things they are not) and maybe in the end having it. We don't know because the girl goes back and kisses him and that's it. What happened after that? Did Don make love to Mona darling or did Tara make love to Ved or did Ved make love to Tara or did Tara make love to Don? Or did all four do nothing?

As one can see it's a complex tale of two people and two other people they would like to be when in Corsica. They return to India with no hope of meeting each other but the rich heiress stalks and finds him (she has her own disorders obviously) but is terribly disappointed to find that the Don has shrunk into some 'Groundhog Day' version - the same life everyday morning. Alarm, shave, coffee, transgender (every day?), holding lift (every day?) and being hopelessly bad at his Product Manager work where he talks of consumer behavior to a listless bunch of executives. Anyway the two neurotics meet at a fine place, where she confesses she has been stalking him but that he should not get psyched, invites him home, finds him thanda (I am presuming that the invite him home led to some other consequences because he is seen going away after a while) and finally rejects his daring proposition to marry in front of a lot of people. 'You are not what I want,' she says. 'I want Don.' But Don is the same fellow madam, minus special role requirements, so how now?

To me the proposal to the girl was out of character too. He is not the kind of a person who will do anything on his own - then why would he propose? And that too after inviting a whole bunch of people to witness the proposal? And without his father and boss approving it? Anyway, rejection gets him riled and his bipolar business gets even more acute. She starts acting like a therapist instead of figuring her own bipolar behaviors and tells him to find his Don, the one hidden deep inside him, the storyteller. He finally finds his Don when his father and the storyteller tell him to end his own story the way he wants to and he does. By going back to behaving like he did in Corsica (which is his real self) and also making Tara behave like she did in Corsica (her real self perhaps). They end with a huge storytelling on some huge stage where hundreds of people watch and he falls at her feet for inspiring the Don in him to awaken. In the process he inspires the auto driver to go back to singing as well.

I thought Tara and Ved were more real. The other two were quite boring despite their constant 'live it up' act. But it moved me enough to make me write so much about it - in a funny way. What do you want is the key question. The answer is quite obvious.
Posted by Harimohan at 11:56 AM