Premaku Raincheck is a movie that is produced and directed by my friend from our Engineering College days, and then a successful investment banker and entrepreneur to boot, AP Srinivas. So I won't trust myself to review this movie without bias anyway. 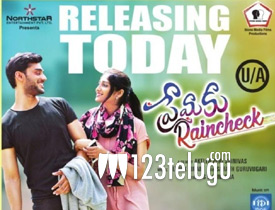 AP, as we know him, is a wholehearted, generous, fun loving guy with a simple, non-judgmental soul, a down-to-earth and humble personality for someone who has achieved quite a lot, and mostly, a big heart. He ticks all boxes of 'success' in every way - Engineering from Osmania, MBA from IIM, Lucknow, a sharp rise in ICICI and then a giddy high in successfully launching a software company and riding a wave. All done, one would think! AP could be sitting in some plush place sipping his cocktails and doing what investment bankers do - but then he would not be AP then.

AP talks unabashedly and with a disarming simplicity about how he used to take tuition's during college, coming from a middle-class family like most of us, and earning early in life. When I met him after all these years, at the music launch of 'Ashta Chamma' we caught on immediately. I remember an animated conversation with him about movies and realised how deeply he loved the medium. He narrated a script he had in mind (Shwetha), met Ganga Raju and other movie personalities and discussed movies in depth, and I knew then, he had this movie bug in him. In more conversations later, I understood how passionate he was about movies. But nothing in what he said or did, prepared me to handle the bombshell he dropped. One fine day three and a half years ago, AP, after considering several other options, decided to produce and direct a movie. What? Won't that be too much for someone with no experience in filmmaking? Why not first produce and then direct? These were questions for lesser mortals like us, but AP was firm. He would produce and direct.

AP was clear as he normally is and fully trusted his investment banker side just as he trusted his artistic side. He learned everything from scratch - screenplay, direction, script, dialogue, music. Software, story, team, script, actors...he went through the process meticulously like any good investment banker would and I remember meeting him at different stages in the process. He got himself a team he was comfortable with - Shashank, Raghu, Sharath. He was open to advise from everyone - met and picked everyone's brains whether they were responsive or not. He got his vision clear, his script in place, his screenplay locked. He spent months finding his Wiki, his Ramya and Tanya. He spent hours learning the intricacies of direction, music, spent hours getting the perfect lyrics in place and worked and worked like I haven't seen him work. In fact, he would always joke - those who work are not my friends. By that definition, AP fully left his old self behind and immersed himself into his project.

As the movie progressed, we kept in touch and my hitherto slightly skeptical self, began to admire and wonder at his passion at bringing his vision to reality. So deeply was he invested - he would play songs, show small snippets, the first cut, seek views. I had little to offer because he was clear about his vision and his process. Much before the movie got done I told AP - that whatever happens to the movie, you have done a great job. You left nothing in your power to chance. And just for that dedication and sincerity of effort and honesty to his vision, AP was through in my eyes. When the movie was done, AP, as only he can, invited every single person who was part of the journey and threw a lovely party where the crew and cast were also present. His eyes light up and he laughs as spontaneously as ever. Thankfully the project did not steal that from him.

For anyone who creates, it is a huge journey, because you are fully responsible for your creation. You cannot hide - praise or criticism. This is where many try to fit into the popular formulas. AP did not think twice about his off beat name, nor the idea of adventure sports, nor several other urban concepts - he went about being true to his vision. That is what matters to me. What went into it, the honesty and sincerity behind it. To me that's the only measure of success. All else is not in our control.

'Premaku Raincheck'is a layered movie. It is about a young man, CEO of an adventure sports company called Wiki, who believes work and romance should not be mixed. But as luck would have it, he finds the perfect girl, mature, smart and caring, in his team. Much as he fights his principles, Wiki finds that his heart has a bigger say than his mind in his actions. A complex relationship with Tanya, who fits his principles but not his heart's diktat, makes things more complex for the conflicted young man. The work environment, friends and their own stories, the conflict between themselves and the others lead to a perfect ending - all ends are well tied up (including some really tiny threads). Music by Deepak Kiran is lovely, the locales breathtaking, Sharath ever reliable. All the debutants - Abhilash, Priya, and Mounika are very credible. The support cast adds to the fun and they did a great job too. It moved at a fine pace, got me believing the characters, made me feel for them and root for them. The story comes together well in the end.

I saw a 3/5 rating on ToI today. Some other user reviews are very promising. 89% seemed to have liked the film. It's a movie for the millenials and AP never tried to dumb it down for anyone which is a good thing. I hope PR gets AP great success. All said and done like I told him, AP was a winner way before the film released. And I do hope he continues and makes more movies with stories that he believes in and are close to his heart.
Posted by Harimohan at 5:22 PM