Notes From the House of Dead - Fyodor Dostoevsky

Fyodor Dostoevsky was sent to a Siberian camp because of his participation in the Petrashevsky circle that protested the Tsar autocracy. Initially sentenced to death and actually facing the firing range, the executions were stopped dramatically by a letter from the Tsar, sentencing the writer for eight years hard labor instead. 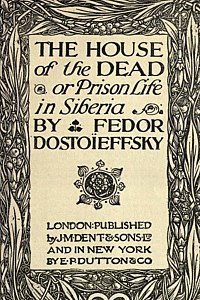 Dostoevsky writes about his experiences in the prison in great detail. His feelings at the long days ahead with no hope, no freedom. He is disliked by the common prisoners fro being a nobleman and he is never able to bridge that gap between himself and the others. There are many people he meets and is influenced by - some cruel, some generous, some fragile. The ways of the prison, the good in the bad, the paradoxes of life all come through in his descriptions of his days.

The dread of walking into the prison, the unfriendly faces and a few friendly ones, the beatings as prescribed by sentence which had to be broken up because the pain was too much, the food, the differences in classes within, the quiet business that goes on when one wants some good food to celebrate, some liquor and even some women. He describes how one manages with shackles on feet - they wore some protection because the feet get chafed and cut, how to remove clothes carefully through the shackles, how to constantly sleep, live with those shackles. The bathhouse scene is described beautifully, the prison animals and how some prisoners loved the animals and how others ate them up.

The prison warden, Major, is a much-hated man and he loses his job in the end and ends up in a bad way causing the author to wonder at how much difference a uniform does to a person. In his letters to his brothers, Dostoevsky mentions how he met some of the kindest, generous and intelligent people in the prison. Some mates die, some try to escape, some reconcile to their fate, some serve sentences for crimes they did not commit, some commit crimes too cruel to even recount.

All in all a slow, painful read that gave a good account of the prison and life inside the prison. Thanks Sagar. One from your collection.
Posted by Harimohan at 11:50 AM