I do not remember Father's Day unless reminded of it on social media etc. Consequently, I did not know today was Father's Day until Anjali walked up quietly mid-morning and gave me a scratch card that she had made.

It was a pink card with some blue paint in three patches.'Scratch,' she said, handing me a coin. I scratched. The entire thing came off with the paint and what was under it. 'Oh oh,' she said. 'Scratch this one,' she said pointing at the next one. This time nothing happened. The paint had really stuck to the paper. No amount of scratching would separate them. I asked her what was under the paint she had put on the little card. 'Three gifts,' she said. 'Anyway does not matter, I will give them all to you.'
The first one was a wooden painting - a piece of plywood from recent carpentry works that was left over. She painted 'Dad' on it with a nice mustache with her paints. It was a lovely gift.

'Thanks so much,' I said, delighted that she took so much trouble for me. I am always amazed when I find anyone doing anything for me. Now I must find a way to hang it up on the wall.

Then came the second gift. A card. It was folded in many ways and opened in such a manner that it reveals a new message as it unfolded. The card itself was intricately done but then, on it, instead of simply scribbling her message (as I would have done), she took a print out of her message, cut it out and pasted it carefully. Here's the message in the card pics. Naturally, my heart filled out at the message. 'Wow,' I said. 'Thank you so much, Anjali.' Of course, she did not let me open the card lest I tear it up in my clumsy ways. She opened it herself.

She disappeared again and came back with the third gift. 'These are gift coupons,' she said. 'You can use them anytime.' On the first coupon was written '2 hugs'. One the second was 'One cup of tea'. On the third was 'Carwash.' I could redeem them at any time. I redeemed one right away. One hug. 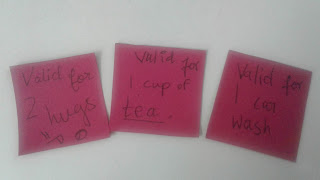 Thanks, Anjali. It's such a lot of work and I cannot understand how you get so many ideas and actually make those things so quickly and so well. Like I feel, thoughtfulness is the true expression of love. So much thought to make my day special simply floors me. I could not ask for a better Father's Day gift - or rather, gifts. Thank you, thank you, thank you!
Posted by Harimohan at 11:42 PM