Coming from Tim Galleway who gave us the fabulous "Inner Game of Tennis" ideas of Self 1 (the mental chatter that goes on in our mind and constantly criticises us and puts dount and fear in our mind) and Self 2 (the part of us that executes and knows how to do things and one that responds to feelings and visuals and not words) and how one can use them to perform better with ease, 'The Inner Game of Work' looks at similar themes - of working freely to perform at our best. Timothy's idea is that work must be done without a felling of 'have to' - one's best work comes when one has the feeling of working freely. This means is not "trying too hard" or subjecting oneself to "endless judgment". This trying to please someone and being dependent on their judgment will always distort our perception leading to a downward spiral. Perception distortion causes Response distortion which causes Results distortion which then causes Self image distortion. Tim says that if we can work at removing the perception of threat to a person, it will affect the rest of the cycle positively. By making a person secure, one can get better performance results from them with far less effort. 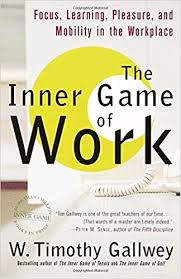 Awareness-Choice-Trust Triad
Tim's triangle of Awareness - Choice - Trust forms a central core of this book. He talks of "Awareness" as being Nonjudgmental, "Choice" as leaving primary learning choices with the student and "Trust" as trusting the student's Self 2 to learn on its own. By reducing interference through being nonjudgmental, we increase the students security in all three planes - of thought, feeling and action. The idea is of course we are all learning to learn. (Another Awareness- Choice -Trust triangle is Awareness of where one is currently, Choice is where one wants to go, and Trust is trusting the resources one has at hand to get there.)

Understanding How to Make People Work
This is a brilliant paragraph that epitomises how to get people to do things.
"My role was not just to make the immediate goal as clear as possible but to evoke from the student the underlying purpose and motivation for reaching the goal. Allowing the student to be more aware of the choices he was making and the reasons behind those choices was an essential part of this learning process. The student felt more in control and as a natural consequence was willing to accept more responsibility, and exercise greater initiative and creativity in achieving their goal. Equally important, it greatly diminished the resistance to change that was inherent in the command- and- control model. There's and ol saying, 'When you insist, I resist.' It is natural for the human being to resists encroachment on his boundaries, and when the resistance isn't expressed directly, it will come out indirectly. Either way, the resistance is detrimental to the desired outcome.'

Interference can come from judgment, beliefs, when people are not working free. Resistance is often to the process than the actual change itself.

The 3 Conversations that Interfere
Tim's a big one for triangles - the next one is about the three conversations one has that interfere.
Inner conversation (one with oneself)
Immediate outer conversation (with people around you)
Background cultural conversation (the cultural stuff in the organisation)
All three could pull you in different directions and affect results.

Inner Game meets Corporate Problems
Tim's exercises with AT&T (a VP came to him seeking help with Inner Game ideas to solve productivity issues) are interesting. The way he honestly tells the AT&T team after their presentation that he had nothing to offer because they did not seem to have any problem at all causes them to define their problem and get over the glitzy cover up. Then when he looks at the operators and realises that they have a boring job which has to be done within a time frame, he decided to bring in awareness exercises to keep Self 1 busy. For example the operators decided to make their job interesting by listening to the customers carefully and trying to understand their state of mind on a scale of ten. The extra awareness kept their Self 1 busy. Similarly they also listened to their own tones and rated themselves and the results. The deeper engagement and challenge shaved time off the prescribed numbers!

Self Expression
While talking of Self 2 Tim quotes Martha Graham. It's a fabulous quote on self expression.

"There is a vitality, a life force, a quickening that is translated through you into action, and because there is only one of you in all time, this expression is unique. And if you block it, it will never exist through any other medium and be lost. The world wil not have it. It is not your business to determine how good it is, nor how valuable it is, nor how it compares with other expressions. It is your business to keep it yours clearly and directly, to keep the channel open. You do not even have to believe in yourself or your work. You have to keep yourself open and aware, directly to the urges that motivate you. Keep the channel open."

Focused Attention Reduces Interference
The key to great work is focused attention or full attention. When our attention is full, interference reduces. It is a state where we enjoy work, where we are interested and challenged. Self 1 operates from doubt and fear and finds complex ways to do tasks. Self 2 comes from a place of knowing and acts with an elegant economy. Learn to focus and thus quieten Self 1. Learn to trust Self 2 and relax and let it happen.

Sales Team Exercise with Self 1 Chatter
Tim's exercise with a sales team was simple and interesting. Two people were asked to play the role of a seller and a buyer. Two others were asked to play the roles of Self 1s to both buyer and seller i.e. they were to stand close to them and in a voice barely as loud as whisper, distract them from the task at hand. At the end of the exercise, Self 1s found that they could do their job with surprising ease (habituated to the voice in our head) while the buyer and seller found their actions influenced by the chatter and were confused whether the Self 1 chatter was friendly or hostile.

Practice of Focus
Tim advocates practice of focus in day to day things like Communication, Listening and Speaking, on calibrating our interest levels, on time and on results. He advocates selecting critical variables to increase awareness and practice focus using three criteria - criteria should be observable, interesting and relevant to the goal.

He has a simple insight - "Before you change something, increase your awareness of the way it is."
Or, in other words notice what you notice.

Redefine Work as Enjoyment
Tim asks us to redefine our notion of work and equate it to 'enjoyment' in our minds. This is a construct that helped a low performing sales team to emerge as the highest performers - the boss simply said they would focus on the critical variable of enjoyment of the job. Enjoyment was defined as ease and excellence in performance. One way to enjoy work is to set learning goals, to learn while working. Tim's next triangle has Performance, Learning and Enjoyment on the three points.

Work Free is Complete Responsibility
Tim says Work Free is about choosing, about being responsible to yourself.

Conformity vs Mobility
A key concept is the difference between conformity (to outside influences) and mobility (your own adaptability to a situation and capacity to move or to be moved). Tim is shocked when he sees Skinner's Box experiment where he makes a pigeon do exactly as a member of the audience asks - to hop anti-clockwise on its left leg by using a series of stimulants like food, a bell and a light. Tim realises he is perhaps jumping to several such lights and bells in his own life. Mobility is about adapting, change, while being fulfilled and harmonious and growing while doing work. Mobility can be achieved with goals (visuals, feeling and with some commitment of time and effort), an attitude of adaptability, an understanding of one's purpose driven through enjoyment than fear and by synchronising movement with direction.

A wonderful quote by Johann Wolfgang Goethe on commitment and boldness

"Concerning all acts of initiative, there is one elementary truth the ignorance of which kills countless ideas and splendid plans: the moment one definitely commits oneself, then Providence moves too. All sorts of things occur to help one that would never otherwise have occurred. A whole stream of events issues from the decision, raising in one's favor all manner of unforeseen incidents and meetings and material assistance which no man could have dreamed would come his way. Whatever you can do or dream you can do, begin it. Boldness has genius, power and magic in it. Begin it now.'

The STOP Tool
Tim advocates the STOP tool - pause in the middle of work and allow Self 2 time before proceeding. Stopping at predetermined times could stop the flow of work but could help by giving a much needed perspective. STOP (Step back, Think, Organise your thoughts and Proceed).

Being the CEO
Tim urges everyone to think like they are the CEO of the corporation, of their life. Who is running your corporation now, how many shares do you own and who owns the rest. Are there shares you want to buy back from others who own it now? Even at the cost of losing their approval or their friendship. It's time to gain control of your corporation. Who are the Board of Directors? Who are interfering with your growth?

On Coaching
Tim's ideas on coaching are excellent and profound. He is very clear that the coach is not to solve the problem of the coachee; he merely gives a perspective that helps his coachee find the solution himself. He says his job is to increase awareness of the coachee's problem and to teach less. A coach is someone who eavesdrops on someone else's thinking process.

Transposing
A wonderful tool he gives to the coach or any manager is Transposing. To understand and communicate better he says first get into the shoes of the other person and ask these three questions
- What am I (the coachee) thinking?
- What a I feeling?
- What do I want?

Coaching Does Not Require Subject Matter Expertise
A brilliant insight is that coaching does not require knowledge of subject matter. He demonstrates that when asked to coach a member of a philharmonic orchestra. The tuba player steps up and tells Tim that he had some problem articulating the upper range cleanly. Tim knows nothing about what he is talking about. He asks the tuba player how he knew that he was not articulating the upper ranges. The tuba player says that he cannot hear it but he feels it in the way his tongue feels a little dry and thick. Tim does the classic inner game coaching method of 1) being nonjudgmental 2) Get the feelmage 3) Quieten Self 1 and 4) Trust Self 2. He tells the tuba player to focus only on the moisture on his tongue when he plays next and forget about the articulation etc. When the tuba players plays he gets a standing ovation from the orchestra. Tim gave him a critical variable to focus on and be aware of and the problem took care of itself. It's wonderful.

Tim finally says that work is all driven by desire - your desire to work free must find roots in your own deepest urges. To work free listen to that voice. Give free rein to the long-quieted voice and let it grow bold.Do not censor it.It will speak, if you care to eavesdrop.

Listen to the Self2. Be mindful. Reduce interference. Life becomes easier and more productive. Wonderful book.
Posted by Harimohan at 9:36 PM