Anjali was very upset when she came home. She walked right in, picked up the phone and called someone. She tried two or three times and put the phone away. We could see she was very upset. She went into her room and shut the door. After a while I knocked. 'Can I come in?' I asked. 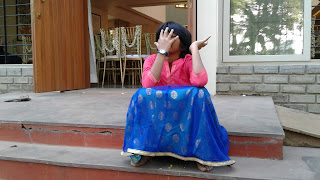 'It is my fault,' she told me crying. 'I should not have said that. It would have hurt her so much.'

I said what I had to and that she could make up with her and tell her that she remains special to her, that there was no first and second and that everyone was special in their own way. And that they had spent so much time since their childhood and that was very special etc etc.

After many more anxious moments and several messages later Anjali got through. Her friend was cool about it all and said she was not upset.

The relief on Anjali's face was something to see and so was the energy in her step all evening. Mostly the learning.

'I was so upset that she was hurt and funnily she was not even thinking about it at all,' she said. We wondered at how much drama we create in our heads and went and celebrated with an ice cream.

But I do agree. So many times I imagined so many things only to find out they had been figments of my own imagination. Good learning. Also to see how much we torture ourselves and how much we deplete our energy with our thoughts.
Posted by Harimohan at 9:39 PM

Hari bhai, one more gem from the Anjali Chronicles ...