Anjali, A Day Out at the Zoo

It is something that I wanted to do for a long time. Take Anjali to the zoo. Sometime before she was two, she started to take a great liking to a book with animal images in it, specially the wilder ones like tigers and bears. Seeing her fascination for the animals her aunts, uncles and cousins bought her more books with animal images, stuffed animals, mini animals etc. Anjali loved it all of course and I thought that she might enjoy watching the real ones. I planned the visit a few times but one thing or another came in the way.

Now that she saw 'Jungle book' the other day, her interest in the animals has again been kindled. It is the year end anyway and her aunt Nalini atta and older cousin Abhishek had already promised her a zoo outing, so we fixed it up for today, after school. We were joined by her uncle from the USA, Satish, Shobha and Chitra and we made our way in two cars soon after lunch to the Nehru Zoological Park. I had some free time so I browsed the net for information. 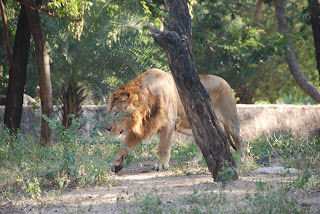 First thing, Nehru Zoological Park is on the other end of the town which is a good one hour drive from my place. It is closed on Mondays so I was spared that surprise. Entry for car, with 5 persons on board, was Rs. 500 or you could enter for Rs. 20 and take the zoo transport inside. Taking a camera inside costs another Rs. 20. Fair enough. Meanwhile Anjali changed her mind about going out to the zoo, when she saw so many people around her, so much potential for fun and games which seemed to be spoiled because of this zoo. She threw a tantrum but we somehow got her on board. By now we did not care if she wanted to go or not - we wanted to go.

It was as the website said. We drove in. First impressions, it did not look like it was being well maintained. I would have liked more order, more neatness, better cared for lawns and boards. You don't find any directions inside - luckily I had printed out a plan from the website so I had some idea. Else you just keep asking people. We took the left turn and went past the toy train station and parked the car alongside the road. First stop were some deer which Anjali liked watching. And then we saw some birds, peacocks, peahens, fowls, pheasants and other nice looking birds. We ventured in by foot and saw a white tiger snoozing (Sher Khan, says Anjali), another tiger, jaguars, jackals, leopards. The enclosures looked rather shabbily maintained from what I remembered last. The animals also looked listless.

We headed out further and saw elephants which she instantly identified as Colonel Haathi from Jungle Book, drove further and saw bison, more varieties of deer, storks and then parked again determined to find out the lions and hippos which were identified by Anjali as must-see categories. A longish walk past an aviary of colorful birds, flamingoes, herons, storks, hornbills and we passed by one sleeping lion which was hidden in the grass. But then we had the good fortune of seeing a couple of lions in the next, and one of them got up and stretched and strutted around to sleep at another place. We wondered why we were given this special treatment by the lion and then saw why. There was this prize idiot who was throwing stones at the lions from outside the enclosure and irritating them. Felt like pushing him into the enclosure. And then the panthers, the hippos. But no rhino. Anjali was now keen on the rhino. We finally asked a keeper and he said the rhino died and there were no rhinos in the zoo. I told Anjali that and she asked me why the rhino died. I said maybe it became old and died. 'The rhino became old and died,' she told her aunts, cousin and whoever cared to listen.

Then a short distance from there, after a small refreshment break at a canteen where everyone messed up the place with all kinds of garbage, we saw the giraffe. Easily the best thing in the zoo, it was young, sprightly, active and magnificent. We spent much time gazing at this beautiful animal as it pranced around its enclosure, and ate from its high bowl. Another stop for some more coloured birds and the crocodiles lying like they were dead in their enclosure, still and quiet, and we were done. We had to tell Anjali that we would come back and see rabbits, which she had now added to the list of animals she wanted to see, later.

Of course there are the safaris, lion and tiger safaris, which we did not go for, the Mir Alam tank where one can boat around, snakes, eagles and vultures. This was tiring enough. Maybe some other time. The zoo was green with tall trees and that itself was such a relief. It is a nice place to spend a day, or half a day and provides much scope for walking around and resting and entertaining oneself. I do wish it was maintained better, it looks shabby somehow. I also wish they had more sign boards so one knows where to go for what. But all in all, a very satisfactory outing and recommended for anyone in Hyderabad who has half a day and wants to get away someplace green and quiet and different.
(All pics by Satish)
Posted by Harimohan at 11:23 PM