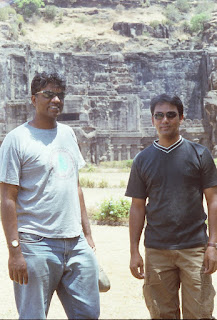 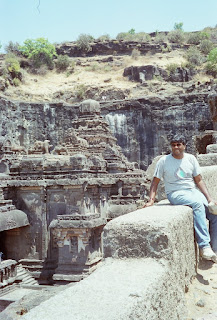 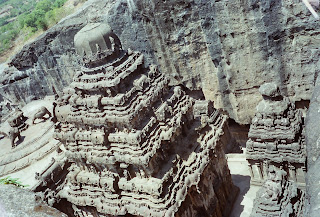 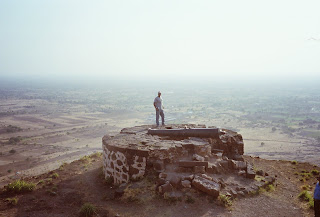 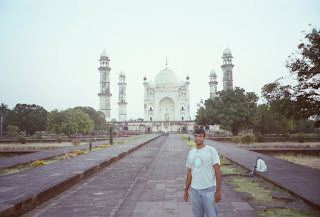 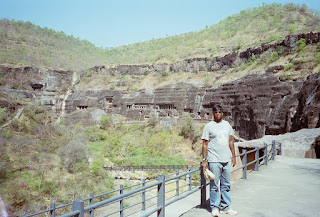 Sunil Jyoti (Topper) and I at Ajanta and Ellora

Sometime in April 2006 (or thereabouts), I took off in a APSRTC bus from Hyderabad to Nanded where my good friend Sunil Jyoti worked as a Railway Officer. He was likely to get transferred soon or so he reckoned, so we decided to visit the famed Ajanta and Ellora caves while he was still around. I reached Nanded after seven hours of heat, sweat and discomfort in the bus and was glad to have someone pick me up at the bus stand. I was driven off to his office in an official looking car where he was presiding over some meetings and once he was done, we headed off to his comfortable flat. The idea was to take off immediately and we did, accompanied by one other chap and a driver in an Indica.
Nanded to Aurangabad was a distance of five hours or so if I remember right and it was not a very comfortable journey. But for the fact that Topper and I laugh at all kinds of idiotic things, the trip would have been dead tiring. We stopped at some Godforsaken place on the way and ate dinner and drank some rum. We reached Aurangabad late at night, checked into the Railway guest house and I remember, slept well.
The next morning we were all up and fresh and hit Ellora which is some 26 kms to one side of Aurangabad. There are some amazing caves where Buddhist monks lived and one can see the gradual improvement in the cave structures and sculptures. There are some twenty odd caves if I remember right, about five of them belonging to the Jain monks. The Kailasa cave is incredible in its detailing and carving - it is supposed to have been sculpted into from the top. Mind boggling to even comprehend.
After spending almost half a day at Ellora, we headed back towards Aurnagabad and stopped at the Daulatabad fort which falls on the way. Now this fort also belonged to the Nizam of Hyderabad at some point of time and was under the rule of Aurangazeb. It's a wonderful piece of architecture and well preserved and the guide took us through all the little nitty gritties that the fort builders had built to make the fort difficult to attack and conquer. Doors with spear heads to counter elephants, small little caves where one can get lost, a place to pour hot oil to discourage any adventurers and so many more. We climbed right up to the top and it was a great feeling.
We entered town and went to the Aurangabad version of the Taj Mahal, an exact replica they say, but made not in marble but in sandstone or some other material. Everything including the gardens etc are like the Taj. Somewhere there is also the tomb of the Mughal Emperor Aurangazeb, a very humble little place that indicated that he was deep inside a very devout person.
It was a very tired trio that hit the guest house that evening and after a quick shower, Topper and I hit a bar and restaurant and had a long drunken discussion over this and that. A good night's sleep and then we were ready to hit the caves at Ajanta.
Ajanta was about 40 kms from Aurangabad and a lot more organized in that you have to park your vehicles at a distance and enter the MTDC buses. This is done to preserve the caves and the paintings I guess from the pollution. It was a lovely morning that we spent exploring the semi circular formation of caves embedded in the hill side. The cave paintings at Ajanta made of vegetable dyes are awesome. We saw every single cave and left sometime after 1 p.m. It was hot already and we rode for a couple of hours before we stopped for lunch. We headed back to Nanded and reached our destination at night. After a good night's sleep we took Topper's car and drove back to Hyderabad.
Am I glad I made that trip!
Posted by Harimohan at 8:19 PM