Book Launch of If You Love Someone - Rocked 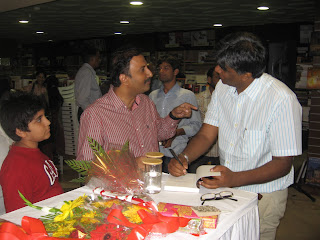 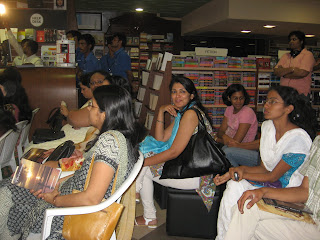 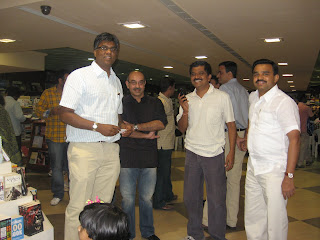 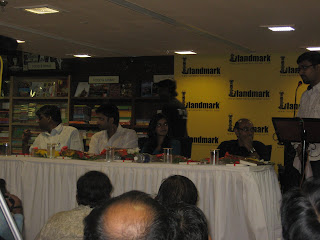 The Hyderabad book launch of 'If You Love Someone...' at Landmark, Banjara Hills went off extremely well. I reached the place at about a little past 6 in the evening with Anjali, Shobha and Chitra. A few people had already arrived and I remember Mithi, BS Murthy, Madhavi Puranam, Nagender, Nagesh, Rasana, Vrinda, Sailaja, Anjaneyulu, Das, Krishna Prasad, among the early comers. We chatted for a while and deliberated if it was appropriate to sign the copies. Gangaraju, the chief guest for the function landed up well in time followed by Mohana Krishna, Sumanth, Swathi and the show was all set to roll. The media was in place, more familiar faces strolled in and we knew that Landmark would be short of seats and preparation as I suspected. But then we all stumbled along happily, knowing book launches happen this way only.
After we were all invited on to the stage Mohana Krishna introduced me and the book in very warm tones. He spoke of how I appeared to be a person who is organized while also balancing a detached attitude to life, to success. He spoke of how the book 'If You Love Someone...' was a big shift from 'The Men Within' in terms of characters, story, perspective etc. How romance as a genre was so different and interesting. he spoke about how I write visually and in short paras which he likes.
Swati spoke next, in her usual, effervescent manner and spoke in, what makes her so relatable, sincere tones about the book, the earlier book and her impressions of me. She read a passage from the book and read it so well that my eyes welled up.
Sumanth spoke about how refreshing it was to be in a book reading session, how he identified with the character Aditya and how he would, if the book was made into a movie, would like to play him. At which Swathi, said she would like to play Meghna and Mohan said that he would love to direct the film! Sumanth read a passage too and did that very well.
I spoke next and did the reading from my bit. Gangaraju, the chief guest spoke next and said that he is launching what was probably a book that most people seemed to have read anyway. But since he read the book, he spoke about my writing style, the change in perspective and spoke so well and so succinctly that it took me completely by surprise. Not more than 10-15 sentences but it was so well put - something only he could have done and so well.
The book release was the next thing on the agenda and after the photo op, we waited for Mohana Krishna to announce the making of 'The Men Within' into a movie with Sumanth and Swathi as the lead pair. The book signing went on for an hour and I met so many people - my school mates (Vasu, Bro. Joseph), my OU Engineering college mates (Sanjay, Choudhary, Anjaneyulu, Sunil Jyothi, Narasimha, Anil and Sujatha, Rama Raju, Sagarika), my MBA mates (Hari Rao, Sravan, Bharadwaj, Sreeni, Vijay, PV, Ramesh, Srinivas Babu, Puppy), my cricketing mates (Venkatapathy Raju, Gajanand, Noel, Pawan, Suri, Krishna Prasad) my writing mates (Vinod, Major Shiva Kiran, Rasana, Vrinda, BS Murthy, Mithi), students from HCU (Amit Rathi, Sushil, the girls, Mayank, Rathinder), VJIM staff and faculty (Durgaprasad, faculty from across India who are attending the FDP), IDBI (Vidyasagar, Murli, Jayashri). family(Shobha, Anjali, Bavagaru, Peddakka, Ajay, Radhika, Nalini, Mythily, Rambabu, Chanti, Shashank, Ram, Sheila, Vajra, Chimu, Bhave's, Chitra and Prashant, Pratap, Shweta and Naren), Ram's friends (Arjun, LV, Papa, Sanjay Reddy, Sharath Marar, Nagender, Nagesh, Vikram), Mona representing the Jaisimha family, Antharyami (Sailaja, Roopa, Anuma, Ipshita, Urvashi, Reena, Ashok, Ranjani, Shanti, Sarita, Mamta) from the film fraternity (Ravi, RK), journos (Das), from my management side (Amar, Madhavi, Madhavi Puranam, Rao from Badruka), Priyanka from Evening Hours, Suresh, Rajan, Jaleel and Nazneen, Don, Madhav and Treena, Vasu and Geeta, Choudhary and Anu, Dr. Lakhsmi, Vidyanath, and so many more that I need to jog my mind to remember. For all of you, a big thank you for coming and supporting me in this big moment. Will post again later with more details and pics.
Posted by Harimohan at 8:52 AM

Labels: If You Love Someone - Launch

Good show Hari! Wish you the same success at the launches in other cities too.