The four pillars on which my musical journey began were Man Machine, Chilly, two tapes that I lost, ABBA and Best of Disco 80. The last mentioned cassette had an iconic cover, the back of a bald man's head with stereo phones on. 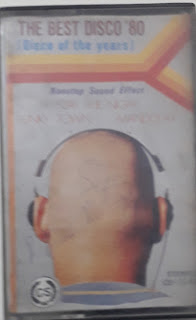 The biggest hits were Stay the Night by Billy Ocean, Funky Town by Lipps Inc and Mandolay by LA Flavour. 'You're ok' by Ottawan, 'Tom Cat' by Gilla, 'Body to Body' by Gepy and Gepy, 'You know me, I know you' by Dan Perlman were the others.

Hours were spent listening to this cassette, especially Funky Town and much later I realised the kind of a monotonous beat and unimaginative lyrics which consisted of 'Won't you take me to Funky Town' repeated all over again wasn't the best. But it was huge then and we cannot forget the many hours of pleasure it gave us.

The sheer unimaginativeness of the names of the songs is crazy. But that's how life was in 1982.

And how Disco slowly came into our life. It was pure rhythm, no attempt at sophistication and all about the feeling. Youngsters loved it.
Posted by Harimohan at 11:38 AM