Writing of the 2nd Novel - Step One 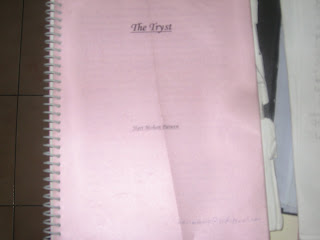 Manuscript of 'The Tryst' 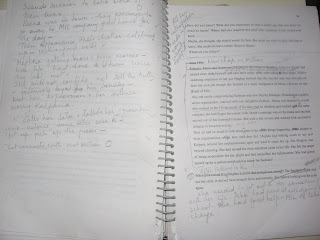 Let me now go through the process of the writing of this novel. I wrote 'The Tryst' (which is what I had originally titled the book) in three months flat. I had a basic hook - that of two youngsters who share the perfect relationship (that goes beyond mouthing 'I love you's' and falling lustfully over one another) - who promise to meet after 30 years of their meeting. The idea seemed to hold much promise for an incurable romantic. I decided to tell the story from the heroine's point of view so I could bring in her own fears and doubts. I thought, could a woman in India, howeever modern in thought, just pack up one fine day and say, I am going off to meet my old friend and will be back in a few days. It was interesting to explore.

More so since I noticed that women in India lived with an unspoken drag on them, of holding back and being held back, in marriage, to an extent that they largely lose themselves. Cases in point are all those women who do wonderfully well once they are liberated from marriage. The question came to me then, do they have to wait till they are divorced and widowed to find themselves? Obviously not. They could find themselves now, and find the strength and courage to be what they can be. The story of Meghna aims to do that without being escapist or without blaming.

While writing the story I wanted to remain true to the basic plot and 'told' the story quickly. The romance of the youngsters being the high point of the first part and the suspense of their meeting the high point of the second. It came to 45000 words and I decided that it was worth that much investment and not more since it had just about that must to say. I figured it might appeal to women readers as a romance - young women might like the youthful romance and older women might identify with the dilemma of the married woman who has to choose between her dreams and her husband's good!

I finished the story in April 2004 and approached a few publishers - the regular suspects. They rejected the proposal quickly!

At this stage I must tell you where exactly I was in terms of being a published writer. I had written 'The Misfit', my magnum opus in 1997 and finished it in one year. Since then it had been rejecetd by all publishers and agents in the world worth their salt and it still remains in my archives. I wrote 'Gulmohur Gang' a children's story collection which was rejected by several publishers and was finally taken up by Senu George of Dahlia Publishers in 2004, a deal which fell through in 2008 after no action from his side for four years. I wrote 'The Men Within - A Cricketing tale' in 2003 and just about completed it, which was also doing the rounds with no success. To add to all this, I had resigned my job at the bank in January 2004 and my last day at work was March 31, 2004 by which time I had decided to finish writing 'The Tryst'.

So that's where it all hung. No encouragement from the publishing world, no job soon, just a mad confidence that I will get published, that I have something worth getting published! What do I do next?
Onward ho...
Posted by Harimohan at 10:30 AM