This is a wonderful book not just on pitching, but on the way we communicate, live. 'Pitch Anything' is about understanding the psychology of what happens when we speak, when we act and how to gain control over the situation with this knowledge. 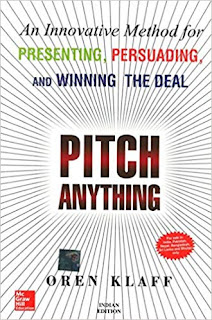 Oren Klaff says that most pitches fail because there is a disconnect between the way we pitch and the way the audience receives it. He should know - he has over 10,000 hours of practice of pitching and he raises on an average 2 million every week.

He says the biggest problem of every presenter is getting the attention of his audience. To do that Oren says we need to 1) Own the room with frame control 2) Drive emotion with intrigue pings and 3) Get to the hook point fairly quickly. This is pretty much what the book is about.

The Psychology of the human brain - Getting your messages past the Croc Brain
Why what we say is not received by the audience requires a basic understanding of the brain. The brain is made of three parts  - the inner core, middle brain and an outer ring.
The oldest part of the brain is the inner core, the Croc Brain which filters all incoming messages and generates flight or fight responses. This part of the brain produces strong and basic emotions. It's all about survival. It is also bad at decision making.
The middle brain determines meanings of things and special situations.
The outermost part of the brain is the neo Cortex - the one with the problem solving ability, the one that thinks about complex issues, produces answers using reason.

We pitch from the neo cortex in an organised fashion, thinking that the neo cortex of the audience receives it. But actually it goes to the croc brain first which filters all incoming messages. Primarily the croc brain ignores if its boring, has a fight or run response if it perceives danger, radically summarises things if its complicated and passes on a severely truncated form. In the crioc brain 1) anything that is not a crisis is spam, 2) it ignores it, if it is not dangerous or not new or exciting 3) if it's new, it quickly summarises it and forgets the details and 4) does not send anything up to the neo cortex for problem solving until it has a situation that's unexpected and out of the ordinary. 90% of our messages are discarded in the croc brain. (And if there's one thing you don't want to activate, it's the amygdala which contains the fear circuitry.) With an understanding of this, we need to pitch in such a way that we get past these challenges.

Which means that your messages should not trigger alarms, should have a pleasant novelty (positive, unexpected and out of the ordinary). To pass the croc brain you must clearly explain the facts, help it choose between two clear options and get to the point fast. Be aware that the croc brain  will ignore if possible, is focussed on the big picture, is emotional and in the here and now with its short attention span.
Your message must be made very sexy.

Frame Control
Oren says that when two people meet they come with their own frames or points of view. These frames collide and square off and the stronger frame absorbs the weaker. It's not a numbers game he says - its a frame game. When you control the frame it promotes social dynamics, stacks things in your favour.
Own the frame and win the game he says. A frame is the instrument you use to package your power, authenticity, strength, information. Winning frames govern social interactions. Strong frames activate basic desires. If you have to explain your authority, power, position, leverage and advantage you do not hold the stronger frame.

To counter a Power frame Oren suggests you do it with disruptions and small denials and acts of defiance. You could also use the Prize frame to reframe events (in a prize frame your audience says or does as if they are trying to win you over. You're saying there's only one like me!)
To counter time frame (when others are putting time constraints on you), understand that when you are reacting, they own the frame. When others are reacting, you own the frame.
When you see attention begin to bottom out, you are done. You've exceeded the time span. Running longer signals weakness, neediness and desperation. Set your own time constraint and leave. Crush time frames with a stronger time frame.
Counter Analyst frames with Intrigue frames. Analysis frames are about cold cognitions - problem solving stuff, numerical calculations, statistics etc. You can counter that with hot cognitions - which are about feelings of wanting or desire or excitement. The two do not co-exist - the emotional narrative versus the analytical mind. To counter an analytical frame, when asked for details give high level stuff and focus on the business relationship. Go from cold to hot cognition.

Telling the story
Understand that no one takes a meeting to hear something they already know. Break analysts frame with strong intrigue story. Be brief. Tell the story, but keep the subject of the narrative relevant to pitch. Always keep yourself at the center of the pitch. As in any good story, introduce danger and uncertainty, create time pressure, tension, and show a serious consequence. Oren gives the scene from Jaws as an example - if the shark had a GPS would it have been as interesting?

Prizing frame - when your target is trying to win your attention and respect you are the prize (if you are trying to get his attention, he is the prize). Croc brain is about curiosity and desire, fear or dislike. Understand the 3 basics - 1) we chase what moves away from us 2) we want what we cannot have and 3) we only place value on things that are difficult to obtain. Instead of you needing money, money needs you. Instead of Always be closing he says, Always be leaving!

Status - Being nice reduces status. Figure who is alpha. Can we switch out of beta and take the alpha. Create situational statuses like French waiters. Create local star power by using your domain (like a golf pro does against the cardiac surgeon). To elevate social status, always be on time. Momentum is the key. Avoid social rituals that reinforce the others status. Have fun. Enjoy your work.

Pitching your big idea
The presentation on the discovery of the DNA molecule structure took five minutes says Oren. We must finish our pitch in 20 minutes max. First let the audience know that it will only take 20 minutes (relaxes the croc brain). Introduce yourself and the big idea in 5 minutes. Explain budget and secret sauce in 10 minutes. Stack frames for hot cognition in 3 minutes.

Introduction
Start with a track record of your successes. Stop with one great thing. Create the 'why now' frame.
Focus on 3 market forces - economic, social behavior an technology. Tell the back story of your idea.
Movement is the key to keep the brains attention.

(- For those dissatisfied with the current offering.. my idea...provides,,,unlike competitions, my idea is..

To hold Attention - we notice anything that has movement through space and time because they are likely to be important.
Budget and secret sauce
Time the message to the mind of the market. Time to croc brain that receives them. To get attention understand what it consists of

The normal attention span is 3 minutes - stay off the details - rich be in high level details. Remember the most important deliverable is you.

Frame stacking for hot Cognitions
We all decide things before we fully understand it. Our Decision Making happens in the gut. We tend to like/dislike before we know. We can therefore influence decision making by creating hot cognitions. Hot cognitions are primal / unavoidable, instant and enduring. Hot cognition is 'knowing' through feeling.


Oren says we can create hot cognition by stacking frames - Intrigue, Prizing, Time and Moral authority. through this process you create wanting

The narrative pattern for building an intrigue frame
Its 's not what happens to you that's interesting, it's what you do about the situations you are in.

Eradicate Neediness
To eradicate neediness, follow the formula!
Case Study
A whole chapter is dedicated to a case study of how he won a pitch against two eminently qualified competitors by using these methods. It's a wonderful read.

How to get started
To those who want to get started on the process he suggests the following steps.
It's a fantastic book. I loved the basic understanding of how we lose attention and consequently pitches, his ideas about frame control, pitching, hot cognitions, neediness and the STRONG method of pitching. Eradicating neediness is a great lesson.

Thanks Suresh. Thanks Oren.
Posted by Harimohan at 11:22 AM