This is a delightful book of short stories and poems written by R. Subramanyam or Mani (his second). Mani is an engineer and mixes the analytical head of one with the romantic heart of an artist. He was born in Nagpur, studied in Hyderabad and Delhi, completed his engineering in Hyderabad and worked for the TATAs in Jamshedpur. He became and entrepreneur and then travelled to Abu Dhabi and Jordan before he settled down in Hyderabad. He shifts between his homes in Hyderabad and New jersey where his son lives and now writes full time. He first book was on his father Shri Ramamoorthy called "It Happened". His wife Valli is a ghazal singer, so art runs in the family. His joy for life comes through in his activities of choice – experimenting in the kitchen, driving or spreading joy around. 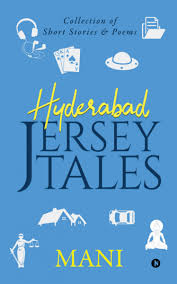 The stories are delightful and untarnished by the heaviness of a serious, adult mind. His thoughts are fresh as a child’s and he writes with the gay abandon of someone who is just enjoying the joy of expressing himself and his thoughts. The book had this lovely energy to it, puts the reader in touch with that aspect of herself and leaves one with a smile on her face.

The first story ‘From Fantasy Planet’ is set in New Jersey where the protagonist Bose is on a vacation. On his regular walk one day he chances upon a UFO and ends up having a conversation with aliens. Mani’s engineering mind, his deep love and knowledge of science is fascinating. The story gives one the sense that he is open minded about possibilities beyond what humans know (which is a great thing because most engineers and scientists believe they know all the answers). ‘Half-Knowledge’ is also set with science in its background but this one is in Hyderabad. Young Zee develops a machine that can read human thoughts and he uses his machine to solve a murder and uncover a sinister terror plot. The story of full of twists and turns.

Mani stays away from science in his third story about ‘Himalayananda’ where a ‘Guide’ like character from RK Narayan’s famous book makes an appearance with a benign smile and simplistic answers. Soon he is conferred a godman status. Conmen, businessmen, a beautiful actress and even college kids try to exploit the situation. The irony is not lost – on how we exploit the concept of god and do anything in god’s name. ‘The Card Game’ is a complex story, again veering away from science but staying true to the mystery genre – a dead body, a gang, a foreign couple, a bunch of card players. When the police arrive they find a lot more than they bargained for. ‘The Banjara bungalow’ deals with the Kirchoff’s law ‘when several feeders carry current to a junction, the algebraic sum is zero.’ The insensitivity and ingratitude of people is brought out in a classic tale that's as relevant today as it must have been for a long time – the pitfalls of having an ancestral house in the prime area of the city.

‘The Oldman Case’ is a story based in Hyderabad  – another ancestral property, two brothers who inherit it and how things sour and create problems for them. Again very contemporary! ‘The Unfinished thesis’ bridges the scientific and the spiritual and it appears that they will meet somewhere finally  – a robot is improvised by a young scientist to see the future. How it helps add substance to his sister’s thesis on Karma is an interesting twist. ‘Driver’s Seat’ is again set in New Jersey and a wonderful tale about judgment and what we see may not always meet the eye. It’s got a nice twist with AI making its entry this time.

I read and enjoyed the poems – 'New Jersey', 'God and Alien', 'Adieu, Morning Sleep', 'Friendship', 'How Important are You' and 'The Electric Pole'.

The child-like enthusiasm, the joy of expressing himself in an unrestrained and uninhibited approach gives 'Hyderabad Jersey Tales' a rare freshness. The imagination is fertile and the scientific insights quite fascinating. Mani should write many more stories weaving science and engineering concepts into stories that explain the concepts to both the serious student and the amateur - I felt I understood a couple of concepts better after I read this book. I really think there is a market for that and Mani is uniquely placed with his scientific knowledge, his storytelling ability and his boundless energy. Something like the Feynman series but with fiction. That would be lovely!

Posted by Harimohan at 2:08 PM

Thx a lot Mr Hari for your honest Book review. It will surely encourage my dad to write more��