The Boys in the Boat - Daniel James Brown

In 1936, at the Berlin Olympics, America was represented by a team of nine University of Washington boys who were an unlikely crew to make it that far.  The boys go on to win the gold and upset Germany and Hitler a bit. However, the story is more about how the boys in the boat come together against many odds to achieve what they do. 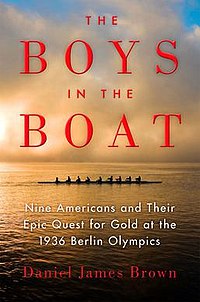 The author Daniel James Brown, met Joe Rantz, one of the boys in the boat in his late years and heard from his the story of the gold medal-winning eight-man boat race from the University of Washington. Rantz has one of the toughest childhoods anyone can imagine - mother dies, father abandons the family, comes back with a stepmother, has children from her and turns the fifteen-year-old out of the house. Those are the days of the Great Depression and its a wonder Joe survives but he does. Joe makes it to school and then college. He realises that if he gets on the rowing team he could get a scholarship and gets in.

Rantz is the odd ball in the team - he seems like someone who is not a team player though he is strong and can row on and on. Going by his past, there is little chance that he will be a  team player - Rantz survived because he told himself he does not need anyone including his father. The Coach of the University team Al Ulbrickson is gunning to beat the University of California team, the favorites, and preparations begin from the first year. He forms combinations, changes combinations, tries all sorts of things and finally goes with his gut. His team, the one with Rantz and the crew, on their day, row like champions. He decides to go with them. The team beats the University of California and gets selected to represent America at the Olympics in Berlin. A time when Berlin was simmering with anti-Jew feelings and Aryan supremacy was being touted.

The boys make it despite certain issues and comfortably so. They win the goal, Italy wins silver and Germany bronze. Rantz learns how important it is to be part of the team, part of the boat to win as  a team. He marries his childhood sweetheart and settles down. The boys meet every few years after their gold winning performance and row in the University until they finally hang the boat up.

Surprisingly the book was published only in 2013 and is soon to be made into a movie. It's a lovely story. Thanks Akshar.
Posted by Harimohan at 12:12 AM