Subramony aka Mony was my friend and colleague from the Business Development Division in IDBI, Mumbai. IDBI was a big conundrum to me - right from its name to the designations we got (What was a staff officer- does he go around with a staff or is he is HR?), everything was a mystery. The people even more so - v serious and supercilious! Our Mumbai office was one whole building of the swanky WTC Towers at Cuffe Parade.

Our BDD was considered some kind of a plum posting. India had just tasted liberalisation and as a development bank, IDBI was keen to make a mark. It was out of its comfort zone now with the markets thrown open and more aggressive competition coming in. Creating a hotchpotch Business Development Division was IDBI's quick response and that's how we all got together.
As an MBA with Marketing as my specialisation they probably thought I was a good fit. The only thing was that my understanding of finance was lousy and especially with high finance, it needed a lot of time for me to understand what was really happening. In retrospect, if they had let me figure marketing out as they did at the Hyderabad Branch Office (thanks Mr Yesaw and Mr. Vidyasagar) I would have really helped its cause but being relegated to putting up sanction notes day in and out really messed with my mind.
The entire fourteenth floor was buzzing with action - one half with the Merchant Banking Division and one half ours (they were the more glamourous cousins!). We'd rarely leave office on time and many times worked till 9 pm or on weekends. I soon found three other pals - Parag Pagankar, Mony and Mahender. Parag was a handsome, popular, star cricketer, having played for Dadar Union and for West Zone in the Vizzy trophy championships, and was from Poddar College, Mony was a CA rank holder and the most accomplished of the lot in terms of financial qualifications. Mony also played club cricket in Trivandrum and was a fast bowler with a big inswinger. Mahender worked his way up in the organisation from being a clerk to an officer by adding several qualifications such as ICWA etc, moved from Delhi to Mumbai. He hated cricket or any physical activity and laughed at our cultural extravagances (like buying music!). He had this incredibly funny Haryanvi response to everything that would make us all crack up,
Mony was always immaculately dressed and would go deep into the project he was appraising. I would have a million doubts and I would pester both Mahender and Mony with my basic questions (like the assets and liabilities actually balancing in the balance sheet!). 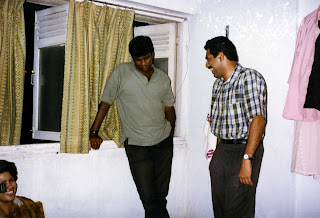 Slowly we became friends and would go to lunch together. After lunch we would stroll around the tower or walk into the shopping arcade close by where I would sometimes buy a book or buy some music much to Mahender's mirth. Mony would be interested though and we would share that music later.
Parag, Mony and I played cricket for IDBI in the Times Shield and that year we made it to the final. Parag and I shared the spoils in the first game with five wickets apiece, he scored a century, and I picked up a few wickets and scored some vital runs here and there. It was a fun and enriching experience. I really enjoyed that particular championship.
Parag was the only one who was married amongst our lot then - to the beautiful and vivacious Mamta - and already had two young children Siddhanth and Esha. On Friday evenings when the work was not too heavy the four of us would walk to Cafe Mondegar in Colaba, a nice long walk, sip beer, listen to the jukebox. Or we'd go to Alps which was less crowded and sip beer and eat some egg bondas and sizzlers. Or we'd head to Bade Miyan kebabs. Mahender was not much of a drinker and would throw down his beer like he would a shot and then wait for the rest of us. There were a few times when the revelry got to us and we just about made it home in bad shape.
On most of these occasions, Mony and I would head to one of our homes - mine was at Nerul and his was at Malad. Especially when there was a weekend coming up. Mony's place had a fabulous view of Mumbai and we'd sit in the balcony, the monsoon blowing away, listening to Jagjit Singh singing 'Jhuki jhuki si nazar'. Mony had this wonderful menu - hot rice, paripappu, papad, and some fabulous podi that his mother made for him. I'll never forget those dinners at his place. On occasion when he came home to Nerul, we'd do stuff like watch TV or laze about and eat Chinese food.

When BDD wound up after a couple of years I was all set to head home. I tried my hand at writing, thought I could shift careers and sought a transfer to Hyderabad. We celebrated my transfer (Alps and Mondegar again) and off I went. Mony got transferred to Pune. Parag and Mahender stayed in Mumbai and are still there. Mony met me after that - he visited me at Hyderabad and then once again after he got married, with Keerthi.
After that he got a job with the Bank of Muscat and headed away. I quit IDBI and went deeper into writing. We somehow lost touch for a short while but then thanks to Mony we got back in touch again. He realised that I had published a book, bought it, read it (and tells me that once in a while he reads it and its still relevant - I am thrilled to hear that). On his trips to India, he always calls and we plan to meet at Mumbai or Chennai. Since Parag and Mahender are in Mumbai, the plan is always to get me there. I missed a couple of their meetings. Despite all the talk, we never met.

But Mony kept in touch. Not too long ago he found a poem I wrote while at IDBI (I'd write some thought and pin it on my desk for that day) and shared it with me with a look what I found - it was lovely to find that memory. As always he asked me if I could make it to Mumbai this year too - he was coming down this June. Sensing my doubt, he made it easy for me. He booked a ticket to Hyderabad and flew down here.
After 20 years.

I picked him up at the airport and within five minutes he was like - man, it's like we just picked up after yesterday. Two decades had gone by. My hair's grey. But Mony looks fitter than he was then. He runs 10k runs! He told me how his life in Muscat was - he is in a senior position now. He's seen the world - some 55 countries at last count. He was amused at my shock when he said he owns 16 suits. He guzzled beer with me as we caught up on old times, took Anjali and me out to a fine dining experience, came home and played Jagjit Singh until well past midnight, came to cricket practice the next day, bought pearls for his family, met another old friend of his, Rao, who was a wicketkeeper at his club in Trivandrum, all in the day and a half. Back home we guzzled some more beer, watched the World Cup, headed to the airport, had an Irani chai on the way and finally it was time to go. We called Parag from the car and he said we should have called him - he would have come to Hyderabad too - we didn't even think of that!
Time had flown. Mony had read all my books save the last one - This Way Is Easier Dad - so I gifted him one copy. I texted him after I got home that I was glad he made time and came to see me. He said he wished he could have stayed another day. Exactly my thought too. It was a straight throwback to those days. Next time we decided we'd do a road trip - something we had been talking about for a long time.  That should be fun.

Thanks for coming Mony. See you soon!
Posted by Harimohan at 4:08 PM