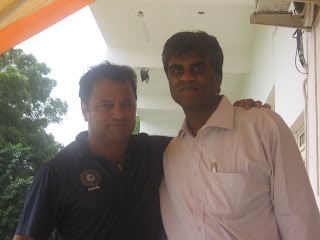 ‘All the world loves a winner, no point becoming a sob story’ - smiles the intense man whose images of stumping Javed Miandad off a L.Siva beauty in a Benson and Hedges match still rake up spine tingling memories. In that one act Vishy displayed an attitude that Indians were not credited with normally – of complete professionalism, self-belief and assurance of knowing his space on the world stage. To me, as a 21 year old MBA student then, Vishy’s act was inspirational, a visual that kept playing in my mind – is it possible for us to be like that – striding the world stage like a Colossus, like an equal among those greats? It was an awesome spectacle and I remember giving that as an example in a speech I gave to my fellow students later.
As I grew older, I realized that people like Vishy are that way because of the way they have prepared. Throughout that series and for as long as he played Vishy was known for his complete dedication to the game, his preparation and professionalism. A mind worth exploring!
I bumped into Vishy at Hyderabad where he had come to do an umpiring assignment, and decided to pick his mind on what goes on in the mind of champions.

I asked him if a sporting win could be designed?
Vishy, gathered his thoughts together, and said he believed that we should invest in hard work, perseverance and process. The key is to persist with the attitude of not accepting defeat and to convert obstacles into opportunities. Winners he said like to win, and they take lessons from defeat. Wining is an attitude and team spirit is the key

How about other aspects – the strategic aspect and the team management aspect?It was important to play to the strength of the team, pick the right combination and know the opponents strengths and weaknesses to seize the early initiative and control of the match. The team must have a strategy, have plans to control the game. One thing that always works is to stick to the basics he felt.


What would give a champion team the edge?Preparation again. Today’s need of the hour is an athletic fielding unit. Bench strength is important to motivate the team. On the team management side, man management, dissent control, rebellion are very important. One must forge together a like-minded unit. It instills a belief in the team that that a couple of performances can turn the game on its head. In moments of doubt one must always realize it’s a team game.

What drove his self-belief?He said he always felt that he felt he could do it. He had prepared hard for it. There was nothing that he was not prepared for. There was no doubting his abilities because he prepared through the grind. What drove him really to excel was the pride of playing for India, of being on the centre stage? Apart from that he realizes that there it is satisfying in the long term to have contributed. He is active in the game of course, maybe one of the few busy men going about coaching kids, umpiring, match refereeing and doing things to the best of his abilities as his process taught him to.

I asked him whether he could have done better justice to his career?Vishy felt that his being a loner could have affected his playing career as he had no support group in the team of his age. Family issues were also a factor with his Dad’s suicide an later, Mom’s death. Maybe he felt, smiling wistfully, an early marriage could have helped by bringing in some stability into his life. Also some PR skills, people skills could have helped him in knowing what to talk, when to talk, whom to talk.

I asked him if he had any regrets?No he said. I am enjoying the love affair. He is grateful to the Karnataka government for the plot of land at Indiranagar and to the Late Mrs. Chengappa for getting the land allotted.

He coaches kids, enjoys it, has become an umpire and is awaiting a test call soon. As always he is fully prepared with 14 years of experience as an umpire and knowing Vishy it won’t be long before he dons the white coat in a big game soon, his ruddy face smiling at the world, doing things the only way he knows he can – to the best of his abilities and making it a better place.
Posted by Harimohan at 6:51 AM