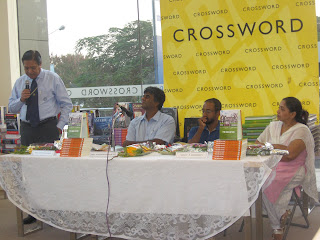 Shri Chandu Borde, me, CP and Suhita
2007 whizzed by. Very satisfyingly I must say. The last major event of the year was a book launch of 'The Men Within' at Pune. Crossword Bookstores, Pune, was gracious enough to host the event. Shri Chandu Borde, legendary cricketer, and Shri C.P. Surendran, journalist, poet and novelist, were kind enough to join the panel. Smt. Suhita Thatte, well known TV and movie actor, in Hindi and Marathi joined me for the bookreading. The event went off well as book readings do, with a goodly crowd of some 50 people comprising friends and relatives mainly, in attendance.

There is one thing about events such as this that always make me wonder, make me want to pinch myself. As a first time novelist who is keen to see his book reach out to all kinds of audiences (infact I would like everyone on the planet to read what I wrote), I keep pushing myself to promote the book in some form or another. Some times people take me seriously and sometimes they don't. But in the end, I realised that it all works out for the best. The right people come by at the right time and give the right vibes. It all works out perfectly.

For example I am truly floored by the simplicity and big heartedness of someone like Mr. Chandu Borde, a legend, and one of Pune's greatest sons. He not only spoke to me warmly and with such disarming simplicity when I first called him, that I instantly decided that when I grow up to be his age, I'd like to be like him. Here's someone who hardly knew me, who did not know what I had written about and with hardly any reference of sorts, and he has the big heartedness to consider being chief guest at my book launch function. When I called on him, he showed that wonderfully humane side to him by considering juggling times and dates between his busy Christmas schedule and I was so touched by it all that I decided that it does not matter whether I have the event or not if it inconveniences him. Finally, we decided on a date that was acceptable to him.

I was also fortunate to have dates that matched CP Surendran's - my first choice to be on the panel. CP Surendran, a writer and respected journalist, whose style is so stark that I always envied him for it (I know I can never write like he does). I have been reading his column since my days in Mumbai as far back as 1994-95 and have always enjoyed it. His perspective is always refreshingly different, it would always be different knowing the way CP writes and thinks, never conforming, always retaining his individuality even if the general idea is the same. He is an acclaimed poet with four collections of poems published by big publishing houses in India. I don't understand poetry much, except that it is a product of intense thought, and whatever little I read of his poetry did leave me disturbed. As a person too, he is direct, forthright and says it like it is, never saying anything because it is the done thing but only because he believes in it. CP is a busy man as the resident editor of Times of India in Pune and when he accepted my invitation to be on the panel I was extremely happy. More so because CP is known to my brother and it was he who put me on to my publisher in Delhi (despite not being convinced about what I wrote).

Suhita is a busy actor and resides in Mumbai. She travelled the distance to Pune to attend the function and read excerpts from it merely as a show of solidarity with me and my ideas. Her role during the entire event was for 10 minutes but she took the trouble to be there despite a hectic schedule, a bus that broke down on the way - all for an event that's certainly not the biggest draw. Suhita is my wife Shobha's cousin and was always supportive of my decision to write, but then it does warm the heart to know that she came all the way for the event. She is an extremely warm hearted person and I am very fond of her but the fact that she chose to travel the distance will remain among my cherished memories.

In such acts of supporting unknown people like me, merely on good faith, the gentlemen and lady mentioned above, have reaffirmed my trust in the innate goodness of humanity a thousand times. More so when my agenda is not so much as to make a commercial success of the book, as to have it read by as many people as possible because I believe that it has simple ideas that could possibly inspire a few to dream, to come to terms with self-belief. And when people such as Chandu Borde, CP and Suhita, Rajan Bala, Charu Sharma and Anita Nair, Ayaz Memon and Sanjay Manjrekar, spare sometime in their busy schedules to lend their energies to a book launch of a first time writer, I am convinced that the book would certainly find its way to its audience.

And in the process I learnt some very humbling lessons from these ladies and gentlemen about how to be as a person. I am deeply grateful for that.