The Way of the Screenwriter - Amnon Buchbinder

Amnon Buchbinder draws much inspiration from Lao Tzu's sayings. His writing reflects much of that wisdom. Some of the best self-help books I found have been screenwriting books. If 'Story' was one, this is another. 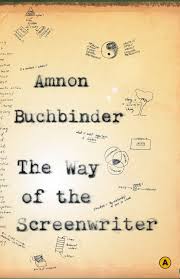 In writing this book Buchbinder hints at mastery, the way of the masters. The story is a living thing he says and the writer must work with it (as opposed to thinking that he is creating it). You cannot force it, you must draw it out, nurture it. In doing so the writer must always go inside out - from within the character's deepest motives.

It is not the writer who 'does' things in a story but the characters and their world - the writer must understand and submit to it.

Emptiness Is The Key
We must see that within what is evident, there is a hidden world. The tales that engage us do so by their emptiness, where the events under description are invisible and inaudible. The screenplay's usefulness lies in this realm. Limitations are a source of power. What is withheld from the audience is a source of great power.


The key to this inner world is metaphor. Story is a metaphor for life...is life itself he says.

Stories Help Us Understand life better
Stories are always about human condition in progress. Meaning makes our living clearer. We recognise the deepest and fullest extent of our being through them. Story makes our life small enough that we can behold it. Story telling reveals meaning without committing the error of defining it.

When ideas come, hold the empty space. Story is a growth in consciousness. Hold the question - what does it want? If we let it have its way it transforms itself into something of beauty. The key lies in the inner world, in what is hidden from view. Devising revelations (in the hidden) is the primary activity of screenwriter.

Our behavior is dominated most forcefully by things which we are least aware.

Power of belief - Use It
The audience wants to believe. The magic of story is an expression of the human capacity for belief. Belief is the capacity to perceive the reality of life within a story. Children - believe - sensitive to the story! The audience enters the theatre, prepared to suspend its belief. an act of trust.
If our capacity for belief is degraded so is our ability to engage with the world.

Structure
It relates part to whole. Economy of time is paramount. Each part must add. If it does not add, it takes away.

Plot - Working  with conflict, The cause and effect chain
Conflict - desire and its encounter with the world
Objective + Obstacle

Setting Objective
Intensity - how strongly does he want it
Depth - how deep is it rooted
Concreteness - can it be attained, can we know and feel
Antagonism - can you generate distraction
Relevance - is the action that flows the story
Accessibility - can the audience have an emotional understanding

Behind every objective there is a motive. Motive provides depth.
A well defined and strongly motivated objective is gold. Conflicts must be pursued to their fullest possible extent.

If Story Has a Problem
What is the objective? What is the obstacle?
Conflict converts desire into action. Moves story forward.

Protagonist
The centre of good. Story is an empathy workout.
Protagonist - one who struggles
The central engagement is the struggle. Protagonists are not born, but made.
Protagonist is where the viewer sits. The moral point of view. Centre of good. Universal, reflects us as we wish to be. A protagonist is the writer's discovery of what it is to walk a mile in another's shoes.

Antogonism
Human action would not be meaningful in a world without antagonism. To evolve. If need and desire comprise the force that drives us forward, antagonism is the counterforce that makes us push and create the friction necessary for growth.

3 types of conflict
1) Motives and objective of other (man vs man)
2) from forces outside the characters (man vs nature) and
3) from within the character's inner world (man vs himself)
A well developed story has all three.

Through plot, time becomes a medium of expression of character. Conflict must be expressed through action.

Through their actions characters reveal their inner landscapes

1 motive can lead to several objectives. Each objective can have several obstacles. Scope for action. These actions are the substance of the story.

Actions should not be magnified needlessly. Characters must use minimum effort to get desired result.

Plot - Working with Time
What canvas is to painting, time is to story. Every story encompasses a scope of time broader than that represented. While the chronicle encompasses the full chain of events, the plot consists solely of the exact sequence of events portrayed on the screen. Working with the distinction between the chronicle and the plot is one of the greatest sources of power for the writer.

Start working from the end.
'What does my protagonist stand to lose or gain?'
'What's at stake?' If there is more at stake, the greater the payoff. (reputation, life)


A turning point in the plot is a bend in the road.

Anticipation. Recollection.
Repetition is a great friend of the screenwriter.

Plot, Part II
Credibility and Surprise
Plausibilityis crucial to belief.
'Unnecessary effort usually has unintended consequences since it isn't inspired by the intended goal.'
The intended goal is a plausible and interesting chain of human behavior - credibility and surprise.

Exposition is information necessary to understand the story.
Seek out conflict - it is necessary; conflict moves the story forward.

Power of paradox - contrary to expectations
When you consider a characters choice of action always consider its opposite.
Work the conventional way ...and do it differently.

Character
What is hidden is what matters. Character is what a person is in a dark room.
Imagination - Curiosity. Take you into the dark room.
Observation

Behavior is the medium of the drama.
I am a man. Nothing human s foreign to me.

The past creates the necessity for the story. Character is destiny.

The Mask - a false identity created by the spell, mask - consequences of fate.

The inner storm - a character exists as a facet of the story. The guiding concern is integirty.

Theme - a general summation of the territory f the story
Where the writer starts with a subject, theme is where he ends up.
Theme is the unity of meaning of the story.
A theme encompasses eveything that happens in story in a unity of meaning. Meaning is  acall to growth, to storyteller ad audience alike.

The anti theme - story contains both
If a theme contains the story's truth and if that truth must be proven, it also must have an anti theme.

A story's setting has an intimate relationship with its theme
It is by creating a small contained knowable world that the story  is able to communicate a theme.
A theme is why the story teller wants to tell a particular story.

Scene is the basic unit

Most important thing about a scene is its necessity, its purpose
A good scene serves more than one function.
Need for speed in a screenplay cant be overstated

Sequence
Acts
Dialogue is a subcategory of action. It belongs to the characters, not the writer. Speech must be motivated. See dialogue in action - express motive. Dialogue is to speech as a character is to a person.

Subtext
All good dialogue has subtext. Believable dialogue conceals as much as it reveals.
1st necessity of subtext is to make dialogue lifelike.
2nd is economy.
3rd, subtext if effectively withheld, draws the audience in
Subtext is the empty space at the centre of the wheel

Text + Context = Subtext
Most memorable subtext is fully loaded. An active performance can be an element of context. Subtext is what the actors act - the truth of the scene.

Process
Work out your story exhaustively before you even begin to write. Writing is an act. An improvisational one. Intuition in action.

Hitting the wall
The realisation that the task is bigger than what we had hoped is universal to the creative person.
The story's problems reflect the writer's limitations and solving the problem the writer grows in his craft.
When co-writing, draw up a simple agreement about rights and responsibilities

The Master's Way
Approach with openness to what we might not be capable of, and search for methods to go beyond it.
A writer is one who writes unconditionally.
Being the question - the answers are easy, questions are tough.
A well asked question provides many possible answers.

Resistance to work is futile. Surrender. Cycle of writing - Emptiness, Preparation, Surrender, Awakening
Put stuff that is not working in the drawer.
The road of excess leads to the palace of wisdom. More ideas, more alternatives.

Prune - Every scene, every word that does not geenrate energy robs energy from those that do.
Pruning has remarkable effect of increasing vigor.

Do not doubt - faith precedes confidence
Suspend belief - writing for an audience that has not seen the movie.

Film making
20000 words will become 144000 pictures (24 frames per second, 60 seconds, 100 minutes)
Know your Audiences - Who is the audience that will go to the theatre and buy that DVD
Hook - Find your hook
Pitching helps a writer learn the story by heart
Success - progress towards a working goal

Lovely.
Posted by Harimohan at 3:59 PM