The Mahabharata is truly the mother of all stories. My early initiation into this story was through our mythological films where we were lucky to have the great NTR and ANR of Telugu films portray those difficult roles wonderfully well, stories told by our parents, by Amar Chitra Kathas, a few novels like the wonderfully written 'Palace of Illusions' by Chitra Divakurani Banerjee and certainly the epic tele serial 'Mahabharath' by B.R. Chopra. Most of them gave me a perspective to the story but what rounded off my perspective or rather what made it whole for me was a delightful two volume edition of the Mahabharata written by an eleven year old author Samhita Arni. Her version of the Mahabharata was well rounded and I got an abridged 360 degree view of this epic. It has so many heroes, their back stories, the philosophy of life and so much more that I am sure no translation or interpretation can ever truly do justice tot his story. 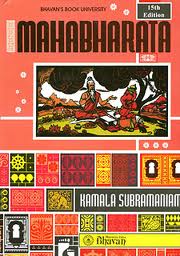 When my good friend Sanjay Reddy a.k.a. Mama, gifted me this 900 page tome by Kamala Subramaniam,  I was more than eager to get started on it. I read it for about two months and having read it am truly convinced that no tale can have a larger canvas, more drama, tragedy than this. Kamala Subramaniam tells the story as it unfolds and it has so many intricate twists and turns, so much intrigue and human frailty incorporated into it that even after knowing the story, seeing it on screen, I could not stop myself from turning page after page as if I was a ten year old reading my first thriller. It is a feeling that I cannot describe as I sat up till 3 in the morning unable to stop as the story of the warring cousins unfolded before me.

Certain things stood out for me this time. The single flaw of Duryodhana - of his envy of his cousins - being one of the main reasons for the war. The belief that his great friend Karna would kill Arjuna even if Bheeshma and Drona would not, is another reason for him to perpetuate the war. The doomed Karna despite knowing his destiny, that he would die defenceless against Arjuna, and despite knowing that he could easily join the Pandavas and rule the Kuru empire as the eldest born of Kunti, choosing to die fighting for his friend. Dritharashtra's inability to reign in his son Duryodhana's desires and the inability of the elders of the Kuru court Bheeshma, Drona. Kripa and others to ensure justice and fairness even as Duryodhana constantly tries to kill his cousins.  The war itself, heavily loaded in favour of the stronger Kaurava army in terms of strength and warriors, slowly turns towards the reluctant Pandavas' advantage (who fight full strength unlike the Kauravas whose infighting neutralises their superior strength).

Bheeshma's advise to Yudhishtir on how to rule a country is a wonderful lesson to any leader. Vidura's treatise is equally so. Of course Krishna's Gita on the war field to a hesitant and discouraged Arjuna soars above all on what man is meant to do when faced by doubt, in understanding one's dharma, on life itself. There is much to learn for the student on leadership, management, team work, duty, politics, negotiation, life skills and so much more. I hope to get my thoughts clear on those and write on them more specifically and more coherently. Right now I am still floating in the ecstasy of having experienced this story.

Duryodhana's incredible charm and convincing powers, the friendship of Duryodhana and Karna, the generosity and heroism of Karna, the valour of Arjuna, the righteousness of Yudhishtir, are stuff we all know of. It was also interesting to know of the exploits of Satyaki who remains undefeated  and who causes as much damage to the Kauravas as Arjuna himself, Ghatotkacha who saves the day for the Pandavas by creating havoc in the Kaurava army forcing Karna to use his Shakti weapon which will kill whoever it is meant for (Karna saves it for Arjuna until Ghatotkacha forces him to use it against him), the tragic death of young Abhimanyu who is killed unfairly by the Kaurava warriors forcing Arjuna to seek revenge against Jayadratha and against all who killed his son unfairly - Drona, Karna included. One among the Kauravas, Vikarna, sides openly with Draupadi in the court when she questions how Yudhistir can stake her when he has already sold himself and scolds the Kuru elders. One Kaurava Yuyitsu fights the Kurukhestra war on behalf of the Pandavas as he joins them before the war. Three warriors remain of the massive Kaurava army after Duryodhana dies a painful death - Aswatthama who is cursed by Krishna to wander the earth forever for his sin of killing unborn children, Kritavarma and Kripa.

The story unfolds at a frantic pace all through the 900 pages and unleashes as much emotion each time as any. To hear of honour, of bravery, of justice, of nobility and to see how everything falls as the war degenerates to its worst as the stakes go upshows what levels man goes to under pressure. Kamala Subramaniam, a learned scholar in the Indian epics and puranas and an expert at Shakespheare  and English literature, wrote this wonderful book in a nice, easy manner, in a language that anyone can understand and left behind a fine legacy for those who want to study this great epic. The Mahabarata by Kamala Subramaniam is priced at Rs. 500 and published by Bharatiya Vidya Bhavan. Much thanks is owed to Sanjay Reddy for gifting me this wonderful story and thereby opening my eyes to the greatest story ever told. I will come back to this and explore many interesting parts of the Mahabharata surely. For anyone who wants to read a good version of this epic grab this book right away. You will never regret it.
Posted by Harimohan at 11:36 AM