D. Govind Raj was a part of the two series that India played against West Indies and England in 1970-71, both historic tours because they beat teams overseas. It marked the turning point of Indian cricket. Though Govind Raj did not play on either tour, he was fortunate to have been part of a team that won, teams that were filled with excellent cricketers. Gavaskar, Sardesai, Wadekar, Vishwanath, Abid Ali, Jaisimha, Bedi, Prasanna, Chandrasekhar, Venkataraghavan were some of the players he played with while Sobers was the one name that comes up in his opposition. He was the only fast bowler in that side but never got to play. 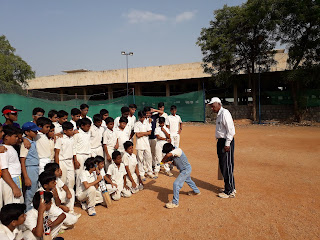 Govind Raj was one of the quickest in his time. Born in January 1947 he played first-class cricket for Hyderabad from 1964-1975 (93 matches, 190 wickets with 5 five wicket hauls). For a long time now Jagannath Das, my friend and Sports Editor of Telangana Today has had this idea of a news article where he wanted Govind Raj in conversation with me. 'Two fast bowlers,' said Das. I said ok. Interestingly, Govind Raj and I had played a game together for MCC in the 1986-87 period when ML Jaisimha was around too. He bowled a couple of overs off a short run up. After that all we heard about him were stories of how financially bad his condition was.

Das finally got his appointment with Govind Raj a couple of weeks ago and we went to his coaching camp at Kothapet near Dilsukhnagar. It's not easy to find the coaching camp - it's inside a school campus for mentally challenged children - Radha school. The owners have given space for about four nets to be set up and some 50-60 boys and a few girls were at the camp. With the ubiquitous lot of parents around.

Govind Raj looked quite healthy and in good spirits. Last I saw him was when the HCA had given us some cheques for being part of the winning Ranji Trophy team in 1987. He was honored too as were all Test players and I remember he had trouble climbing the dais. Now he looked far more at ease.
'I started playing for Keshav Memorial school as a batsman who bowled off spin,' he said. 'We had no coaches. I played for Hyderabad schools as a batsman. It was Jaisimha who told me to try my hand at bowling and that too at fast bowling. It seemed to work as I could generate good pace and get a good outswinger going.' He showed the bowling action to a few kids and it was just perfect for an outswinger. Can't go wrong with that action and finish.

He recalled the twin tours of West Indies and England and the victories there. 'I should have played a
game in England. It was a green top and we had Abid Ali bowling the new ball who got four wickets but on the other end, Gavaskar bowled. We lost the game. But no regrets. I played with some of the best.' 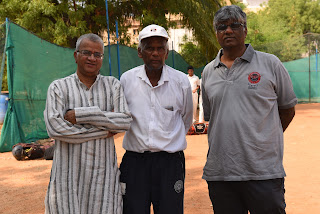 Heart over head, he did not go to play county cricket in England because they did not give him a ticket for his wife, someone he had met in Guyana. And then in 1975, after his first class career was at an end he went to England and worked in SBI, London. After retiring from the SBI he took up a job driving buses in London. The joy on his face is visible. 'I loved driving so when my wife said why don't you drive instead of sitting at home I went to the bus company that operated buses. They gave me training and I drove for five years. Lovely huge buses. That was the best part of my working life. It was financially very lucrative too. Then I had some problem with my sciatica and had to stop driving but I really enjoyed that period.' Obviously, he just does what his heart tells him and gives a damn for all else. When Das tried to get an angle at the driving part he said - I loved it. I am not ashamed of it. That ended that angle.

Back in India, he gets a pension of 22500 from the BCCI for first-class cricketers who played below 75 matches - something which he disputes - he played 93. Cricinfo says 93 too. BCCI is like a brick wall or a black hole - his representation for the last five years are heading straight into the black hole. If they do recognise the 93 games, he is bound to get a 25 lakh one-time payment too. Apart from the BCCI pension he also gets a monthly pension from the UK government where he worked for 30 years. 'I am pretty comfortable,' he says. 'If I get the 25 lakh from BCCI that is good. All I want is clarity on that issue and if I have played more than 75, I don't see why they should not pay me.'

'I came down to India because my children told me that I could do what I love here,' he said. 'I know the game and I love the game so I will give back to it. I have not been able to play so my purpose is to make at least one cricketer from this camp play for India.' He reels off names of some of his wards who are good prospects, is full of energy as he coaches them and is certainly burning with the desire to make a difference. The parents of the kids seemed to have realised they are onto a good thing. This place is the third one they have found for Govind Raj. 'They did everything, found the place, cleared it up, set it up. 120 kids come here. We charge only 500 bucks a month. I have four coaches assisting me, need balls, all that comes to 45000, so we just about break even. We are not doing this for money.' It is not the usual lackadaisical camp with bored and uninterested coaches, there is a serious energy there.

Das did not let me have the conversation as he promised and instead asked all the questions himself. I squeezed in a couple. Das seemed more interested in the hard-luck story. But what I came away with was a man who had a clear purpose in his life and who wanted to give back. His eyes showed that purpose and the energy in his movements belied his age and his sciatica related issues (for which he takes painkillers every day). 'I go home after practice, eat lunch, rest and am back by 430. Once every January I go back to London for a month. I am pretty happy with my life.' He is remarkably articulate and clear in his communication and recalls things very lucidly and with an amused smile in his eyes.

What more do you need? A life purpose that is related to doing something you love, being with youngsters who have dreams in their eyes and supported by people who love and respect him. Whatever you do, I'd say don't ever pity Govind Raj. He has something that most people don't have - a life purpose. Good for you Mr. Govind Raj. And all the best with your coaching camp and your purpose.
Posted by Harimohan at 4:19 PM