When my younger brother Ram went into the business of producing movies sometime in 2008 the first thought I got was - man, we're really far from the movie world aren't we? I had no clue about how those things work and all I know is to go and watch movies. 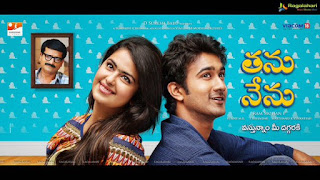 Even given that he worked with Suresh Babu Productions and with UTV on movies and television, given his elite training and the IIM' A, background, I wondered at this decision. Funnily Ram never really watched movies as much as I did when we were growing up.

Then I learned some more about the movie he was making. Small budget, new cast. I never heard of anyone in that cast except for Swathi whom I'd seen on television. I wondered what would make anyone watch a movie like this. (I really had and still have no clue how the movie industry works.) The movie had nothing of what I thought was about movies and stars, sets and money, glitz and glamour, sex and violence. They were a low key bunch, all normal next door characters, young people with normal aspirations but exceptional talent. Suresh Babu and some other big names came for the muhurat function. I did not even know what 'Ashta Chamma' meant and I asked someone. I hoped it would all end well for Ram. One final look at the cast and crew and it sure looked unsteady for me.

Nani, Swathi, Srinivasa Avasarala apart Mohan Krishna Indraganti's great film making talents came to the fore in that movie. There are many other names I forget to mention but each as brilliant (Sreeramachandra sang the title track and it was his first break if I am not wrong. Kalyan Koduri, the music director also broke ground there). The music, singing, lyrics everything. The first time I saw the movie I wondered - but this does not look like a regular film. Then the jokes flew every time I watched the movie and slowly I realised what a great product they had made with a bunch of untested, talented youngsters. I remember watching the first show at Satyam and feeling good at the crowd reactions. Choudary, Kumar were with me and they both had smiles. Sigh. Of relief.

'Ashta Chamma' became a runaway hit. It brought several stars and a new type of clean, family films - the stuff my mom would have loved to watch if she were alive. Or even what my Dad would have enjoyed laughing at, with his great sense of humour. People still say good stuff about the movie and none more so than Prof. Jyothi of the School of Management Studies, University of Hyderabad. 'Ashta Chamma' became a case study at the ISB as a case where movies can become hits by following management principles. Kotler got that right - make a great product first.

It was only after the initial fear and apprehension had died post-success of the film that I could genuinely appreciate the courage it took to make such a film with so many new faces. I don't think Ram had money to throw around, nor did the producers, so the movie had to work. The easy way is to take safe routes. But Ram believed that the safe route was a good script, good skills and he invested both belief and time in them. Few would do that. In a similar situation I would not have done that. Why spend time breaking my head over new faces? I'd rather go with known devils.

But big risks pay big rewards. Belief works. This was 2008.

At the 100th day function at Ramanaidu Studios, I dropped in for a short time. I was pretty amazed to see that many artistes had not seen Ram till them. I could hear them whispering - 'he's the producer'. Crazy.

Then 'Golconda High School' happened. I was looking to sell the movie rights of 'The Men Within' and one production house did show some interest. Then Ram decided to do it himself, as a tribute to the game he enjoyed playing a lot. Rights sold, I got a little closer to the film making process as a consultant for the movie. I was intrigued by the way he picked the team again. Mohan, Senthil. Sumanth, the kids. The outdoor shoots, rains, school grounds all delayed the shoot a bit more than expected. But one by one the pieces fell in place and the movie saw the light of the day. 2011, January, 'Golconda High School' hit the screens.

It did fairly well. Critical acclaim. But no cash ringing.

It set Ram back a bit surely and he was not too happy with the way it turned out. Some learnings. It took him a while to get on track with the third film.

If the first two movies seemed outrageous in terms of stories, people etc the third was even more. Raj Tarun and Avika Gor, young and fresh, Virinchi, as director, a Hindi film composer who made songs sound different, and all set in the heart land of the Godavari belt. The movie did not move an inch outside that rural setting, Raj Tarun stuck to his accent, Avika pulled off being a Telugu lass. 'Uyyala Jampala', clean as the first two, hit all the right notes with the audience and Ram was back with a roar. This time with his new production house - Sunshine Cinemas. Akkineni Nagarjuna co produced it and promoted the film tirelessly. Raj Tarun became a star and he delivered a couple more hits and so has Avika.

They tell me 'Uyyala Jampala' is a huge hit with family audiences on television.

And when it was all seeming like things were going fine, Ram decided to turn director. Like Nani said in his speech at the press meet, I wondered too. But inside, I was glad he made the plunge. For the simple reason that Ram's growth would add more dimensions when he wears the creator label. To create, to take responsibility for what he created, to understand the process and pain of being the creator - it adds different dimensions.

I was happy that a great young talent like the supremely likeable Santosh was getting his break with Ram. I watched the shooting on a couple of days and saw the amount of freedom Ram gave to his team. It's one of the most gruelling tasks I feel, a director's (a job I'd never do even if I was offered all the money in the world - it's tough as hell), since he has to hold the energies of the entire set together. And he pulled it off, being gentle with his new actors, crew, while wearing the producer's hat at the same time. Whatever I saw of it, 'Thanu Nenu', I loved it. It's irreverent, fun and naively innocent. Santosh is brilliant and I expected nothing less from him.

While we await the release of Ram's directorial debut on the coming Friday, November 27, 2015, 'nervously' as he said on his fb post, I see no reason to even look at any other tag but that of success for him. I look at the movies he made, the talents he launched, the investment he put in nurturing that talent, the courage that is required to go that route in an industry that is alien and I say he is already past the line. It is also a very intriguing dynamic between him and Suresh Babu who have collaborated together and made this wonderful brand of movies in times when we can easily lose faith in all things simple and good. Whatever unfolds now is only academic. No one can prevent Santosh from being a star, he is that good and some more, as Nani and Raj Tarun graciously said in their speeches and what many more would say when they see him. I am pretty impressed by Ram's debut work which shines through in a difficult movie filled with quirky and complicated characters. 'Thanu Nenu' has retained all the integrity and honesty of his brand of films, and the same clean fun too.

All the best Ram. Good job. Waiting for the 27th. And all of you who are reading this blog, please do watch.
Posted by Harimohan at 10:01 PM

All the best. We badly need someone making good Telugu (or any) films in the days of Salman and so on.