The Heritage Walk organised by the Tourism department is a fine concept that helps enthusiasts explore the heritage of Hyderabad and it's magnificent old city in particular. The Telangana Tourism Department offers three Heritage Walks - Heritage Walk 1 (the most popular and which I am led to believe is typically on the last Sunday of the month) starts from Charminar and ends at Chowmohalla Palace. Heritage Walk 2 (typically on the 1st and 3rd Sundays begins at Charminar and ends at Ashurkhana) and Heritage Walk 3 (normally on the 2nd Sunday of every month) starts at Charminar and ends at Purani Haveli. All walks start at Charminar around 7 am every Sunday (at the side where there is a board mentioning the timings to visit Charminar and buy tickets etc). The walks cost a paltry Rs. 50 which includes a fine breakfast of two idlis and a vada.
I had promised Anjali a heritage walk this holiday season and Shobhs joined in, so the three of us made it to Charminar at 7 am. The only place to park is the government hospital to the left of the road as you pass Charminar (they charge Rs. 20 an hour). You also get a great shot of Charminar from that elevation and we found many photography enthusiasts clicking away with their expensive cameras and Nikon t shirts. We parked and walked past the Bhagyalakshmi temple which had a large stream of devotees queuin up to pray early in the morning.
Many devotees were doing pradakshinas of Charminar and praying to it or applying ash on their heads as they walked by. There is a small mosque right beside the temple on the inside of Charminar and a few Muslim ladies were praying there. The temple juts out on one leg of one minar.

We walked to the front of Charminar and the security guard let us in. The Assistant Tourism Officer (ATO) Mr. Anjaiah asked us to look around the Charminar from the base - entry to the top is prohibited. This was the closest I got to the Charminar yet.

I had actually hoped to go on the Heritage Walk 3 to the Purani Haveli and was on the right day for that - but then they changed the schedule because the Ashurkhana, a prayer place for Shia muslims, which is down the road near Bahar cafe, has on display many motifs or alams this muhurram season. It is open only for a week so the change. That was perfectly fine - I can aways come back next week.

After walking around the base of Charminar and getting some early morning snaps of the iconic structure, we sat down and waited for some more people to join us. Finally at 745 we left, by then another three walkers joined us. We were given an introduction by Mr. Anjaiah and then handed over to the guide Mr. Suryakanth Sambrani, a senior freelance guide who spoke well and had a fine knowledge of the place and history.
Mr. Sambrani first gave us an account of why Charminar was constructed - it is always a challenge because most people are confused about who the Qutb Shahis were, the Nizams, the Paigahs, The Asah Jahis, the Moghuls, the Nawabs and why there is an Indo Sarcenic element to it all. But he did a great job of getting it all in quickly. I realised that the Charminar had four stories and was wonder struck at that. Then we headed North (towards Madina) and I made another discovery - that the Jama masjid (1598) is older than larger and grander Mecca masjid and that they were different mosques. However we did not go into the Jama masjid.
We then moved into the area where a Sunday seconds market was opening up slowly with some really interesting stuff - they sell anything - and from the square saw the charkaman (four arches). Charminar kaman (south), Sehr-e-Batil ka kaman (west), Machli kaman (north) and Kali kaman (east) were built by the Qutb Shahis around the time the Charminar was built (1591). 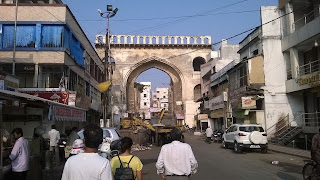 The arches served as gateways to the royal palaces - which are not there any more and have made way to some crowded modern day homes.
However one gets an idea of how the city was originally planned - the jewellers market, the mandi, the clothes market  and so on.
We walked towards the Batil kaman past some early morning idli and dosa vendors and came upon the mitti ka sher, a mud statue of a tiger which  is believed to be 150 years old. How it survived all these years is a mystery but apparently locals believe it is a good omen and preserve it. It has no boundaries, just lies on the road side.

Back on the main road and we slipped into a small crockery market and back on to the main road again.
We crossed over after Madina across the road and walked into the Pathergatti market area.
Then into the Devan Devdi, which housed the palaces of the Salar Jung nobles, many of whom served as prime ministers to the Nizams.
Only the entrances remain and their palaces have long since gone. Wonder how? And who claimed that land and built all these new houses and constructions?
We exited out of one of the gateways and came upon the Kaman Chatta bazar, which is a very interesting kamaan. It stretches from the Nayapul to Purani Haveli.

We turned back and headed towards the Badshahi Ashurkhana or the 'house of mourning' which was built by the Mohammed Quli Qutb Shah in 1593-96. It is one of the odlest ashurkhanas and imambaras in the counrty. 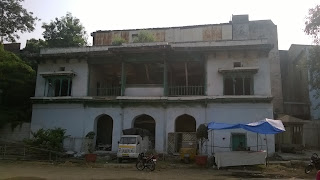 We toook of our shoes and the women covered their heads and walked into to view all the motifs on display. Its wall is decorated with enamel tiled mosaics, similar to the tiles we see on the Qutb Shahi tombs. 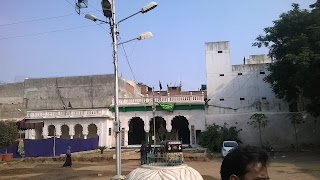 We were met here by Mr. Anjaiah and his colleague Mr. Siddiqui who offered us breakfast. We ate and headed back on foot to Charminar - a distance of a few hundred metres which takes about 10-12 minutes. 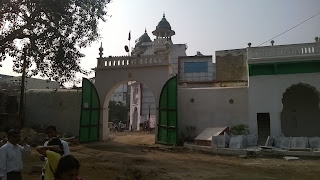 It was a morning well spent and Anjali seemed to like it too. I also believe that to know a place one must walk and walk and walk through it. The walk takes over an hour so it would help to have a cap, shoes and to carry water and a snack if one cannot hold on till 9 ish when breakfast is served.

I checked with Mr. Anjaiah, the helpful Assistant Tourism Officer of the Telanagana Tourism Department, if he could arrange guides for personal tours and he said he would be glad to do so. 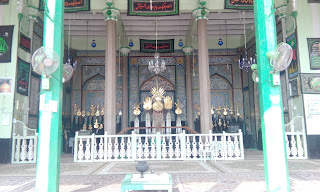 His number is 9553485577 and anyone who needs help to organise personalised tours can call him. Similarly our learned, cultured and distinguished guide Mr. Suryakanth Sambrani also shared his contact details - 9491152725.
Anyone interested in heritage walks and guides to help discover Hyderabad's historical glory can call these two gentlemen for help. As for me, I would love to spend a day out there in the old city, slowly browsing through and imbibing its flavors, culture and history.
Posted by Harimohan at 6:08 PM