The debate between whether talent works best or hard work with a growth mindset works is finally over. 'Mindset - The New Psychology of Success' (Ballantine Books, USD 16, 246 p) addresses these issues precisely and presents convincingly the case in favour of hard work and the growth mindset. Another good one from Rajesh's collection, Carol Dweck's book 'Mindset' is an interesting and engrossing book that focuses on the two governing mindsets that rule our lives and how one mindset can help us grow to our potential and how the other may not. The well-known Stanford psychologist has researched enough to know what she is talking about and she gives examples from sports, schools, colleges, business, relationships, teaching, coaching and it is fascinating to see the fine differences and conclusions she presents. The book primarily is about the two mindsets - fixed mindset and the growth mindset - on which she dwells in detail. 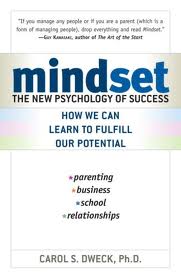 The book states that anything can be learned and that hard work and growth-oriented learning is more likely to take you closer to full potential than simply relying on 'talent'. The author brings out the basic differences between learners and non-learners and states that learners are the ones who are likely to fully achieve their potential. But the two mindsets - fixed and growth - seem paradoxical and appear to be the opposite. For example the fixed mindset makes a person want to always succeed (so they do not try anything new for fear of failure), so they do the same things again and again, because "smart people always succeed". The growth mindset person sees success in stretching themselves and in learning, and thereby becomes smarter in the long run. Most people who believe that talent can see them through without the need to work hard and constantly learn, fall into the fixed mindset.

Primarily what the book says gives hope to everyone and pushes them to do better because it is a question of learning constantly. Intelligence is not fixed. One failure or success does not define you. The more you use your intelligence the better it gets. So the person who is constantly challenging oneself, who does not worry about hiding shortcomings and who is playing with bigger and older people is constantly bettering himself. Challenge and interest go hand in hand for the one with the growth mindset. And the harder the challenge the harder they work. Clearly the Fixed Mindset gives short term results while Growth Mindset is for long term.

In sports, where the concept of the 'natural' is most common, the book pretty much proves that there are no such thing as naturals. Talent is the starting point but there is an enormous amount of hard work required. The case of Wilma Rudolph, the fastest female sprinter on the earth in 1960, winning 3 Olympic golds is one such case (she had braces on her legs till she was 12 and was not expected to survive her illness or even walk). Apart from some (like McEnroe who has not had the growth mindset and a few others) the author talks of James Marshall, an American football star, who scored an own goal in a big match but quickly got out of the mindset and made his team win by scoring two goals after recovering from the horrendous mistake he made. She cites Mohammed Ali who was not built like a boxer but trained on his strengths, and Michael Jordan who worked twice as hard as any, as cases of sportsmen who put in lots of hard work to get where they did. It is really about understanding that talent is not everything, and hard work and growth orientation is the key. People with talent as their main weapon stopped working hard.

While on how these mindsets affect the fortunes of companies, the book cites companies that did well, those that did not and those that did well and sustained it. The leaders of companies that did well - leaders with the growth mindset - were not larger than life, were not ego oozing, not highly talented but self effacing people who asked questions and confronted the most brutal answers, looked failure in the face and maintained faith they would succeed in the end surely. They did not try to prove that they were better than the others, surrounded themselves with able people, looked at mistakes and deficiencies, added skills needed for the future. They were not worried about measuring and protecting fixed abilities, looked directly at their mistakes, received feedback and altered their strategies accordingly. For growth leaders, success was about learning and growing, and failure was motivating, and a wake up call to put more effort. Iacocca and Welch are compared and other leaders such as Lou Gerstner and Anne Mulcahy are analysed for their mindsets. Leaders are made and not born concludes the study (I agree). And the best thing is that they are made by themselves. In the corporate scenario, the book says, we have bosses and not leaders. Leaders are the ones who have genuine empathy, who mentor and guide their employees and peers, and not boss over them.

In the areas of relationships as well, the issue of the mindset can make or break the relationship. In the fixed mindset, people seek revenge and in the growth mindset they look at forgiveness and moving on. Most seem to think that if you have to work at it, the relationship is not for you. In fixed mindset we tend to look at  relationships as mind reading exercises. The mindsets also explore the connection between problems and counselling, shyness, bullies and victims.

The chapter that interested me most was the one on parents, teachers and coaches who have the biggest impact on students, children and wards. The book emphasises the attitude of developing and conveying the fact that you are interested in the child's / ward's development. It warns agains giving the child and ward needless praise as it conveys to the kid that he / she is more talented and can set them off on the fixed mindset path. It is better to keep the child pushing his / her limits each time, than giving up. (Make them push limits a bit each time without demeaning them.) Instead of protecting them from failure by lowering standards, it is better to talk of bettering their preparation and of effort. It is important that we convey the right messages, clearly and honestly and mean what we say because children learn and pass on messages. Coming from Hyderabad and Andhra Pradesh where achieving the IIT or Engineering rank is paramount, I can identify with parents who appear to want the best for the child in the worst way. "We love you they say but on our terms". Great teachers, Dweck says, believe in growth and intellect and are fascinated by the process of learning. They set high standards and a motivating atmosphere. (There is the amazing story of a group of disadvantaged children doing amazing things when standards were set higher - 3 and 4 year olds reading vocabulary for high school students, 7 year olds reading the "Wall Street Journal" and older kids reading Plato's Republic, Animal Farm, Machiaevelli. 5th graders reading the Mice and Men, Joy Luck Club, To Kill a Mockingbird and having discussions as well.)

The growth mindset is about hard work and more hard work. Talent is good but to rely on it entirely is useless. With hard work you are likely to go a long way in the long run. But hardwork and growth is the real clincher. We need to set high standards for wards to work with (or colleagues, or team mates even) to work with and equip them with the right tools to handle it and guide them. It's always beter to tell the truth and show them how to bridge the gap and not leave them in the middle. The best teachers are about learning.

While dealing with coaches, the book cites hard driven coaches who got results, but who did not help the players grow in other areas. The cases of Bobby Knight, the coach for the successful Indiana University and that of JohnWooden, the coach for UCLA are examined. Wooden taught his players to be successful in life while Knight restricted himself to the Championships - even sacrificing the players self-esteem to achieve that goal. Success was seen as being full preparation and full effort - "you may be outscored but you will never lose". I love that statement. All you need is to make your best effort.

The best coaches never differentiated between their wards and treated everyone equally. They were non-judgmental in their talk on developing the ward (not simply praise, but feedback). They set high standards and give process feedback and the growth framework. They believe that everyone can learn, are tolerant of mistakes, do not judge, show the process, ask for commitment and full effort, give respect and coaching and develop the players potential.

While on changing one's mindset the book dwells on the importance of asking for help, doing those small acts that could change things, working on beliefs and mindsets and get a process orientation. One has to get over the-world-owes-me and denial (as in my-life-is-perfect syndrome). One should work at the mindset by pushing gently to find something harder to do when something is easily achieved. One should also remember that champs are people who work the hardest and constantly challenge themselves. The best way of course is to learn and help learn.

When you think of any failure, says Dweck, feel it, then get over it after taking any feedback worth taking. One must understand that it is about high effort and high risk (what if we make the effort and its still not enough). Certainly low effort has no chance. On ability and accomplishment there are examples of Edison, Mozart and others who learnt and practiced for years. Research showed that the ones who did well were the ones who were treated like geniuses - and they performed. The key is in being treated like geniuses with clearly stated standards, with help and hardwork and not simply by attaching positive and negative labels.

In a wonderful visual at the end of the book Dweck condenses the two mindsets and explains it all in a nutshell. Simply the Fixed Mindset is about guys who desire to look smart, who avoid challenges, who give up easily, who get defensive, who see effort as fruitless, who ignore useful nagative feedback, who feel threatened by others successes and as a result of all this, they plateau early and achieve less than their full potential. The growth mindset guys desire to learn, to embrace challenges, to persist in the face of setback, to see effort as the path to mastery, to learn from criticism, to find lessons and inspiration from others success and reach even higher levels of achievement as a result. The growth mindset takes you closer to your potential.

The book slams the basic idea that intelligence and superior output cannot be cultivated. It talks of how exceptional individuals have a special talent in identifying their strengths and weaknesses. Success is learning and not about proving that you are smart. It is about stretching, about self-esteem, learning, preparation and effort.

I loved the book because it validates much of what I feel. I do a workshop called 'The Champion's Mindset' based on my experiences as a cricketer, writer, lecturer and coach, and my years in the corporate arena, and can see  how wonderfully Dweck has put the fine ideas of talent and hard work in place. I identify with almost everything she says, in each arena that I have been exposed to, As the book's blurb says it is a good book to read for every parent, coach, teacher, corpoate leader to have, to own. Wonderful stuff and a must read for everyone.
Posted by Harimohan at 10:47 AM